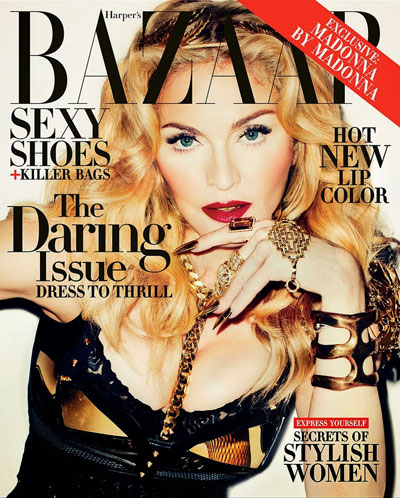 Madonna is making it so hard for us to believe that she just recently celebrated her 55th birthday. For the cover of Harper’s Bazaar’s November 2013 issue, shot by photographer Terry Richardson, the queen of pop showed off an icy set of grillz and ample cleavage area while wearing a sexy black number complete with what looks to be a gold-chain choker or leash. In the accompanying essay, Madge dishes on her personal life including the terrifying moment she was raped just shortly after arriving in the Big Apple:

New York wasn’t everything I thought it would be. It did not welcome me with open arms. The first year, I was held up at gunpoint. Raped on the roof of a building I was dragged up to with a knife in my back, and had my apartment broken into three times… I don’t know why; I had nothing of value after they took my radio the first time…