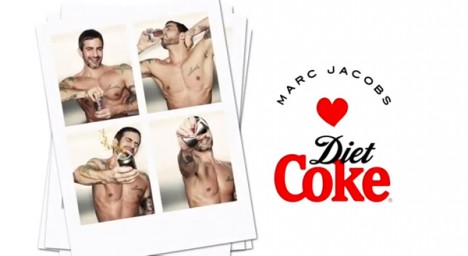 American designer Marc Jacobs gets into role as he takes over from Jean Paul Gaultier as the creative director of Diet Coke for 2013.

At the end of the month, the brand will unveil new cans by the designer who heads up his own signature clothing line and is also at the helm of Louis Vuitton.

After JPG’s eccentric style, Diet Coke is now looking at a more casual look for this year with designs and ads that will reflect Marc Jacobs’s trademark style codes.

Consumers will be able to see the results of this collaboration on cans which will be unveiled on February 25. The aluminum bottles will also be made over by the designer and will be revealed on March 12.

Diet Coke is celebrating 30 years of sales in Europe in 2013 in a campaign called “Sparkling Together for 30 Years.” MJ is also looking back at that period, having sought inspiration for the product collection in the past three decades of fashion.

As Coca-Cola explained, the range will “capture the rise of female empowerment through the Eighties, Nineties and Noughties,” as well as integrate some of Jacobs’s favorite symbols and quirky motifs.

“I feel very privileged to be the new Creative Director of Diet Coke and put my stamp on the 30th anniversary campaign. Diet Coke is an icon… and I love an icon!” admitted Marc Jacobs.

To give consumers an idea of what to expect from this new collection of cans and bottles, an ad featuring the designer himself makes clear the spirit of the campaign.

The new ad is a nod to the famous 1990s Diet Coke ad “Diet Coke Hunk,” featuring an Adonisesque heartthrob who enthralled all the women in an office. However, this time round, Marc Jacobs is exposing his chiseled body in a photo booth.Via.Luxuo