Married To The Mob Vs. Supreme 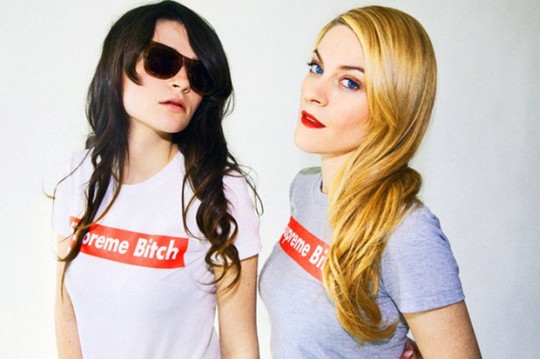 So the throw down between Supreme and Married to the Mob has officially blown up. For those of you looking to catch up, the story broke Monday with a New York Mag story detailing Supreme’s decision to sue Leah McSweeney, founder and owner of Married to the Mob over use of the Supreme Bitch logo for infringing upon trademark rights. Here’s an excerpt:

[Leah McSweeney’s] first T-shirt was a sort of homage: supreme bitch written in the Supreme (via Kruger) style. Jebbia carried the shirts in Union, another store he owned. As Supreme’s fortunes multiplied, so did Supreme Bitch. Rihanna posted pictures of herself in a Supreme Bitch cap. Karmaloop and Urban Outfitters have sold Supreme Bitch items. In January, McSweeney took what would be a normal step for an upstart clothing label: She filed a trademark application for Supreme Bitch. Two months later, Supreme sued McSweeney for $10 million and demanded she remove the offending items from retailers.

Also worthy reads for further detail: Complex breaks down the lawsuit; A statement from Leah McSweeney; Gabriella from Miss weighs in on legalities; and Barbara Kruger, the original artist who inspired the Supreme logo, responds with an epic description: “Cluster fuck of totally uncool jokers.”(And yes, there’s already a tee shirt!)

You guys who follow us know we have always supported McSweeney. She basically epitomizes the spirit of what we consider to be a Snobette chick. Plus we have always been committed to fierce independent female entrepreneurs and that is McSweeney to a tee. That said we have no idea how this case is going to work out. It’s pretty impressive that famed civil rights attorney Norman Siegal has chosen to take on the case, that is for sure.

And maybe we’re biased but we do think from a public sentiment perspective this was a major misstep on Supreme’s part and a pulling back of a curtain that is going to expose a side of the company it’s done a very good job of hiding over the years. All legalities aside, from a strictly streets perspective you don’t bless Supreme Bitch when the scene is in its youthful we’re-all-in-this-together-non-money-hungry phase, but then decide nine years later when you only care about making more millions that, wait a second, it’s not okay, Imma crush you like a bug. Especially when so much of your brand has been built on thieving and copying in order to make you seem cool and edgy. Because of that this is a public relation’s nightmare for Supreme (and comments on the various sneaker boy blogs bear this out). We have mixed feelings about Supreme, but basically we’re like, ’bout time, this take down was a long time coming. And hahaha, they should’ve known better than to take on McSweeney ’cause that bish NEVER backs down from a fight nor does she ever give an eff or let anyone intimidate her.

And beyond the specifics of this fight, mark my words this case marks a turning point for streetwear as we know it. It’s the end of an era and an entering into a new phase, people, with Supreme leading the charge. And no it’s not a pretty or nice one. Sort of sad but this is how these things work.