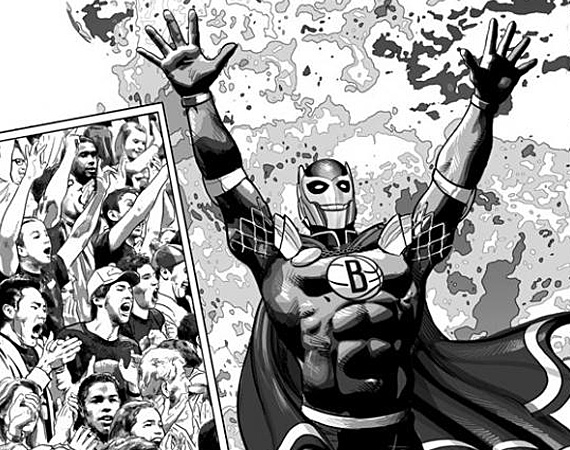 While parts of New York City hobble back to normalcy after Hurricane Sandy, the newly minted Brooklyn Nets finally had their first season opener against the Toronto Raptors on Saturday. Not only was it the team’s first game of the season and the first regular home match at its new home, the Barclays Center. The event also saw the debut of “BrooklyKnight”, Brooklyn Nets’ official team mascot. Doubles as NBA‘s first “superhero”, the BrooklyKnight will appear to defend the home court against “the invasion of opponents.” during each Barclays Center game. In welcoming this mysterious new icon to Kings County, Brooklyn Nets enlisted the help of Marvel Comics in the rendering of BROOKLYKNIGHT #1, a 32-page comic book. Penned by Jason Aaron, writer of Thor: God of Thunder and Wolverine & The X-Men titles, with illusrations by Mike Deodato of Amazing Spider-Man and New Avengers, the Nets organization freely distributed the limited edition to all guests at the game.

For those who missed the occasion, a set of limited edition BrooklyKnight trading card will be given out during Brooklyn Nets vs. Orlando Magic game at Barclays Center this coming Sunday, November 11th. There will also be other gifts through the NBA season. VIA FRESHNESSMAG