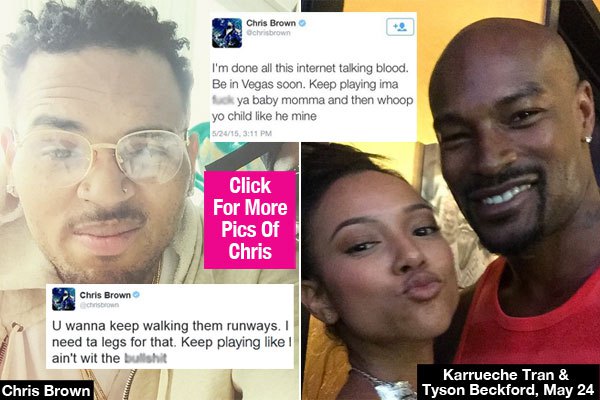 Looks like Chris might be feeling territorial over Karrueche! After Tyson posted a cute selfie with Chris’ on-again, off-again lover, the situation appears to have spun out of control. Chris and his crew reportedly ignited major beef on Twitter!

Well, Chris Brown, 26, and Tyson Beckford, 44, have pretty much triggered Hollywood’s nastiest new feud. Tyson posted a selfie with Chris’ ex Karrueche Tran, 27, on May 23 in Las Vegas, and Chris didn’t seem to like that too much. Chris’ friend, Kid Red, posted a message getting a dig in at Tyson before Chris allegeldy threw dangerous shade the model’s way in now-deleted tweets.
Chris Brown Threatens Tyson Beckford Over Karrueche Tran?

Kid Red posted an Instagram video on May 24 and left a message for Tyson that Chris appears to have endorsed. The message read:

“MEMORIAL DAY WEEKEND aka the ni***s will be out. .. We just came to party tho , unless a ni***a wanna try us … And that includes u model ni***s “Cough Cough #TysonBeckFord, we see everything LiL n***a” #DontPlayYaSelf. #CedarBlocka#FruitTownPiru #OHB #FillmoeNi***sDoItAll@tysoncbeckford.”

The video has now been deleted. Chris reportedly chimed in with his own shade towards Tyson on Twitter. Those tweets have been deleted as well.