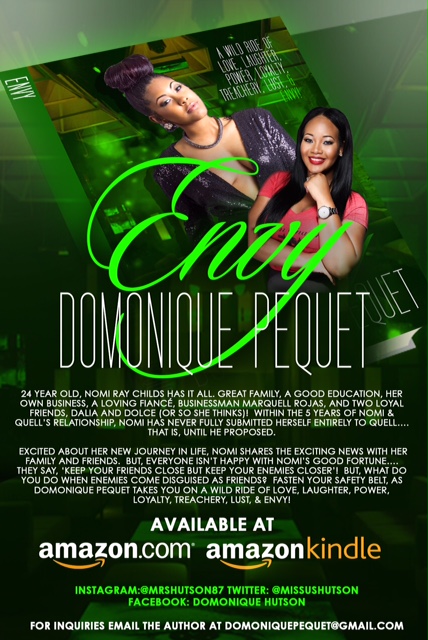 Get familiar with local author Domonique Pequet (Lewis-Hutson) was born in New Orleans, Louisiana. When she wasn’t spending her summers with her cousin at her grandfather’s home in Gulfport, Mississippi, she would read and make up stories of her own.  At the age of twelve, Domonique read her first Urban Novel by Omar Tyree, Flyy Girl.  The Coldest Winter Ever by Sister Souljah soon followed, making Domonique fall in love with Urban Literature. Domonique began to start writing on her own at the age of 10.

In 2011 Domonique started writing her debut novel Envy.  She completed and self- published Envy in June 2015.  Domonique is currently working on her Envy Series, and two spin off novels.  She resides in Kenner, Louisiana with her husband.

Domonique had this to say about her novel ENVY, “The title speaks for itself. As women and even men, at some point in our lives we’ve been feeling envious towards someone or on the receiving end of Envy!”

Keep in touch with this art hour by following her on all her social media tools:

Previous « Being Single In Atlanta: How Did I Get Here?
Next Young Greatness ‘I Tried To Tell Em’ Listening Event @ Apres Lounge Recap (New Orleans) »