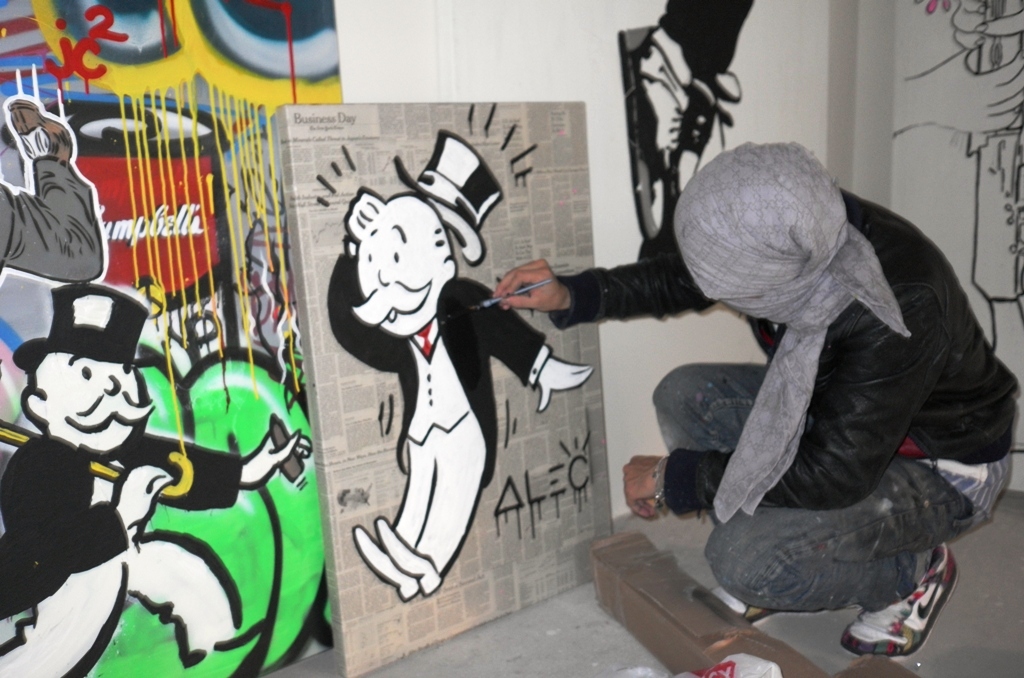 Alec Monopoly is an American street artist, graffiti artist, and painter. He is known for his satirical spins using the Monopoly man, in reference to contemporary styles or situations.

When asked by Complex Magazine about his brush with the NYPD Vandal Squad, and jumping through a garbage chute in an effort to avoid them, the artist had this to say:
“It didn’t hurt, but going down [the garbage chute] was kind of nasty, being in all of that garbage. I was so paranoid, I thought they were tapping my phones. I actually still think they were tapping my phones. When we were setting up the gallery show, there were like four cop cars outside the building, and if the gallery hadn’t been connected to a hotel, I wouldn’t have gotten out of there. I got out and into a cab and laid down in the back seat. That’s the good thing about New York, once you’re in a cab you can be invisible.”

Although graffiti continues to be conveyed as a crime, in his feature in Juxtapoz Magazine, the artist discussed his best efforts to avoid the vandalism aspect of the street art world:

“I stay away from mailboxes, highways, freeways, and basically any federal and government property. I like warehouses and abandoned buildings. For example I would never hit a coffee shop like the one we’re in: they [the owners] are trying to make it just like I am. I try to be as positive as I can about what I put out there and I try to do it with imagery everyone can identify with. Most people walking by my stuff are not graffiti people or art people, so figuring out a way that everyone can identify with my work is important.”