‘Miami Vice’ Ferrari up for Auction 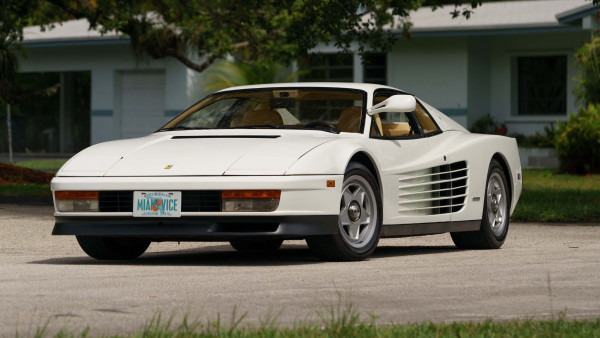 The white 1986 Ferrari Testarossa used extensively in the classic 80s cop show will be going under the hammer at the Mecum Daytime Auction in Monterey this August.

The star of Miami Vice wasn’t Don Johnson, or Philip Michael Thomas, it was the bright white Ferrari Testarossa that the undercover cops raced through the streets on the trail of drug dealers and other miscreants.

Famously the car was black when it arrived on set but director and executive producer Michael Man decided to have it repainted white so that it could be seen clearly during night-time scenes – unwittingly sparking a trend for white supercars the process.

The Testarossa has been sitting in storage since the show finished in 1989 and was only unpacked earlier this year for a full engine-out service.

It has 16124 miles on the clock and has been authenticated by Ferrari Classiche, and while Mecum is yet to place an estimate on the car, a standard, immaculate Testarossa can easily fetch over $150000 at auction.

But for a car as iconic as this the figure could be 10 times higher.