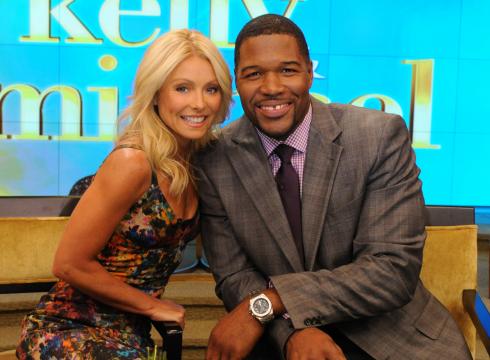 “there was definitely something special” in their chemistry, says Michael Gelman, executive producer of the newly retitled Live With Kelly & Michael. “They’re able to have this fun, and they have a shorthand together, and it just works,” he says. “Having him come back all these times made it easier.” Ripa warmly embraced Strahan after introducing him amid balloons and confetti on Tuesday: “Now it’s time for the new era of our show to begin.” And she said of her 6-foot-5 partner, “It’s so nice to have a co-host who can literally sweep you off your feet.” (as he did.)

In a news conference that followed, Ripa said the camaraderie is “spontaneous,” adding “we have similar senses of humor.” Strahan says the chemistry is genuine: “You can’t get on live TV every morning and fool people. We’re two people who can laugh at themselves and laugh at each other.” The show’s formula won’t change, though Gelman says he “can’t wait” to feature Strahan in the syndicated show’s annual Halloween costume party.

Strahan, 40, brought along his fiancée, Nicole Murphy (Eddie’s ex, WHO KNEW ABOUT THIS THOUGH?) and says the welcome “was a little overwhelming for about 10 seconds. And then when I was hugging Kelly, that’s when I was calming down.”

He’ll continue to be a host of Fox NFL Sunday, commuting to Los Angeles on fall weekends, then return to New York to be with his “new TV wife.” Strahan has co-hosted the show 20 times, most of them since Philbin left last November, and was shown in a clip from a guest appearance in February 2008, just after his New York Giants won the Super Bowl, saying he might someday like to replace Philbin. “I was joking!” he says now. “It was like a prophecy,” Ripa told viewers.Ripa says she mostly enjoyed the tryouts (except for one co-host she wouldn’t name) and says it “reminded me so much” of her own on-air tryout as a replacement for Kathie Lee Gifford. “I was having so many flashbacks of my life 12 years ago.”

Strahan is no stranger to television. In addition to his Fox duties, he starred in Brothers, a short-lived 2009 sitcom on that network, and has hosted cable reality shows. Was his appeal to male sports fans a factor in his selection? “It wasn’t the reason we picked him,” Gelman says, “but it could really help with that.”