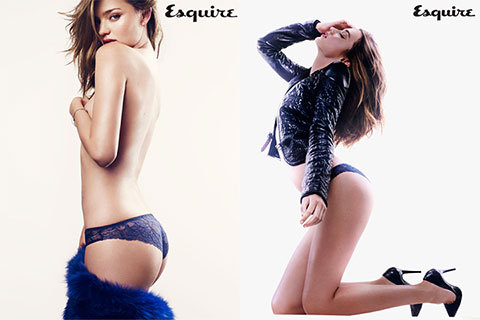 Miranda Kerr — a Victoria’s Secret Angel and the smouldering face of our December issue — is Esquire’s sexiest woman alive.

Miranda Kerr’s killer figure and curves are on display in the December issue of Esquire UK. Shot by David Slijper for the magazine, Kerr models little clothing, but lets her body do most of the talking.

When asked about her body, however, Kerr shared: “I believe in celebrating the female figure and embracing what we’ve been given, not hiding that.”

Confessing she was a tomboy as a child, Kerr opens up to the magazine about growing up in the Australian countryside.

“I spent my childhood outdoors on my grandparents’ farm. I learned to ride a motorbike when I was about six, a little PeeWee 50,” Kerr revealed about being a daredevil at heart.

“I’d climb trees — there was a big weeping willow. We had a flying fox [a zip-line]. I was so fortunate to grow up like that,” she adds.

Previous « Sorel x Concepts Collabs For Line Of Exclusive Boots
Next Music: Kendrick Lamar – The Jig Is Up (Dump’n) »