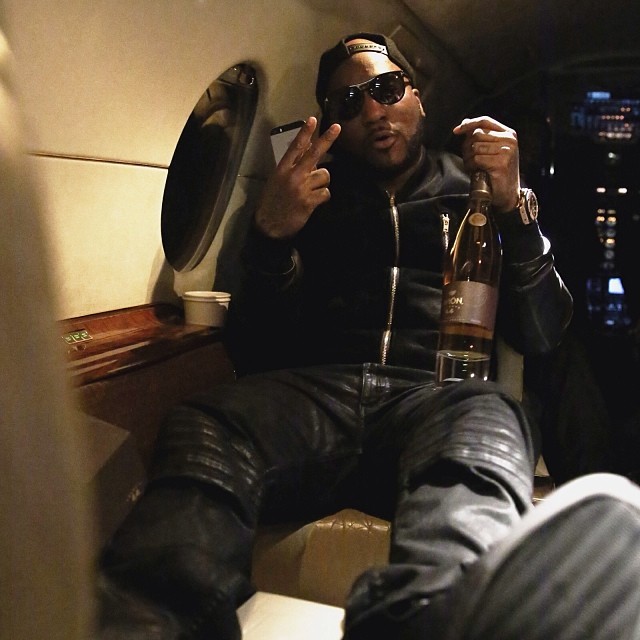 Last night Jeezy had an exclusive listening party for his forthcoming LP, Seen It All. Miss Info TV made the most of the opportunity to hear the CTE front-man’s album early and was nice enough to give us an early review of the project. Check it out after the jump!

1. “What You Say” (Produced by Childish Major)
Jeezy stared the session with a fast paced trip back to the trap. Childish Major laced him some knockin’ 808s on the uptempo track. It’s the typical Snowman subject matter where he brags about how he still runs the block. “What You” is basically Jeezy making sure his fans knows he is still the same ol’ G. He spices it up with classic Jeezy bars like: “Bout to set up a cookin show on Netflix/ Call it ‘How to Cook a Brick.’

2. “Holy Ghost”
Jeezy penned this song one day when he wass back in the hood, riding around in his Ghost with the driver. As he was just reflecting on his past life, the Snowman started giving out 100 bills to the kids outside. He then noticed how all the children were saying things like ‘Jeezy I want your life, you got it made.” This made him think about how most fans can only see one aspect of his success—the cars, money, women, etc. On the record, he addresses how people can only see from the outside looking it. He touches on the mature perspective that he gained since transitioning from the streets to music. Jeezy questions his success and the people that came with it. Production wise, there are heavy snares and piano keys on the track. It’s definitely a more “hip-hop” sounding record than we’re used to from Jeezy. Thank Kyambo for that.

3. “Beautiful” feat. The Game
This song really has a soulful feel to it. It’s a far cry from the trap beats that the Snowman fancy’s. Spanish sounding strings and a girl crooning in the background command the beat. The song has carries a nostalgic feeling, something where say Nas would tell a tale of growing up in Queensbridge. Both Game and Jeezy celebrate success and the good life on the track.

4.“Want Me” feat. Wiz Khalifa
Wiz definitely brings his Trap Wiz flavor from his recently released 28 Grams mixtape over to Jeezy’s world. The beat will have you boppin’ your head and your arms doing the “trap dance.” Lyrically, it’s not Jeezy’s best performance but that’s not what this song is about. Khalifa raps double speed and shows out over the Snowman.

5. “Black Eskimo”
Here’s where Jeezy really starts playing with his flow and delivers an animated style to match the choppy production. It’s 808 heavy and he really rides the random notes thrown into the mix. Along with the standard bass pattern, there are a lot of odd little noises and sounds on this track. The subject matter is your standard “brick talk” from ATL’s top trapper.

6. “4 Zones” (Produced by Mike Will Made It)
Before this, Jeezy played “Seen it All” (feat. Jay Z) without saying much before it, and he wanted opinions of the song from the room. After I asked him how he got Jay to sound like he was fresh off the block again, Jeezy started reminiscing on how much street shit he experienced before his rap career even took off.

At one point he got lost in his hustler days and remembered how he was the first one in ATL to get the all black 645 Beamer with burgundy guts in the inside. And, this was before his first album came out. He remembered how he was so eager to take t out to Magic City just to stunt and was calling late Def Jam executive Shakir Stewart on the cell while he was driving up there. Little did he know, Shakir just bought the silver one himself was racing to Magic City, too. So now, they’re both flying down the highway bragging to each other about how they are about to tear down the parking lot at the strip club. That’s when Shakir says ‘Man another Beamer just pulled up on me, I’m about to smoke him.” When he looked over, it was Jeezy, and they both lost it.

That transitioned into “4 Zonez,” which really means 4 ounces. The Mike Will Made It produced song is all about getting back on your feet when you get knocked out. Sure, every hustler would love to flip straight kilos, but sometimes the going gets rough and you lose it all. When that happens, in Jeezy’s mind, all he ever needed was 4 ounces of cocaine to get back on his feet. And, that’s what this song is about. Not necessarily selling drugs, but just having the mentality of never giving up when you are faced with unfavorable circumstances. But the craziest part is Jeezy’s use of auto-tune. It’s not even like he just adds it on to a few bars, he really harmonizes with it on the hook and gets his T-Pain on. Sounds odd, but he bodied it.

. “Enough”
Jeezy continues to play with no flows on “Enough,” which features some horns on the instrumental and a positive message for the go-getters. His thug sermon on this one revolves around not caring what the naysayers say about you and sticking to your guns no matter the situation. He also harmonizes a bit on this while creating an uplifting anthem that a lot of folks will be relate to.

8. “Addicted”
People are definitely going to have a lot to say about this song but that’s what music is about. With T.I. riding shotgun, Jeezy cut one for the clubs and almost adopts a sing-song flow for the very first time. Childish Major came through and laid the radio friendly beat in about 15 minutes flat, Jeezy says. Admittedly, Jeezy said neither alcohol nor drugs are his vice but he has accepted women as his number one weak spot. Again playing with a different flow, the Snowman sounds less aggressive on this cut. But by no means is that a bad thing. It shows he is still growing musically this late in his career as a real musician should. He admitted that he wanted to cut a record like this for a long time but didn’t know if his fans were ready. This is a straight party song that could definitely work for top 40 radio.

9. “No Tearz” feat. Future
Jeezy says this song best describes the moral and theme of the album. Instead of heading to the club with Future, they cut a song about all that they’ve overcome in stepping off the block for good and pursing rap full time. With Future Hendrix on the hook, Jeezy reflects on the friends that he has lost, the cost of fame, and how he feels content with life right now. This is the most radio friendly and mainstream sounding beat on the project. Also, Future gently spews the hook like a trap Bob Marley (Jeezy says). For once, the Snowman sounds “happy” on a record, almost serene if you will. Trust me, when I say you never heard him like this before.

10. “Quarter Block”
This is the Jeezy that his core fans love. Big production and a lot of talk about kitchen wares and whipping bricks. “Quarter Block” is also one of Gabe T.’s favorites from the album and he personally made Jeezy play it at the end. Heavy rock guitars and keys make this more than average drug song.