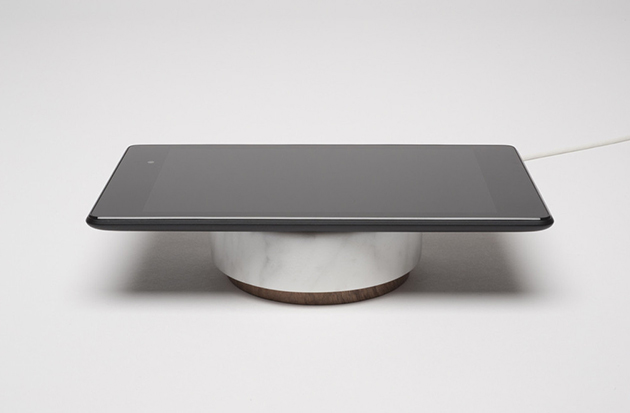 Wireless charging has been lurking on the fringes of mobile technology for some time now. While it has long been a cool feature of many modern smartphones, few products have really broken into the marketplace and made full use of it. Now, a new Kickstarter project from the small town of Castelnaudary in Southern France is the unlikely force hoping to change that. The company is called Orée, and their product, the Pebble 2, serves as a wireless charging point, high-definition wireless speaker and microphone, all encased in an attractive housing made of either walnut, tilia or white marble.

The premise is simple: come home, place your phone on top of the Pebble 2, and you have a speakerphone, music player and charging station all in one. While, at present, only phones by Samsung, Nokia and Google have the wireless QI induction technology as part of their hardware, the company have developed a special “jacket” for the iPhone 5 and 5s that allows it to take advantage of all the same benefits. All eyes will be on the Apple press conference on September 6, with many hoping the new iPhone will include the technology as standard. In the meantime, you can place an order for a Pebble 2 via the Orée’s Kickstarter page.

Previous « A Closer Look at the PUMA x McQ Collection
Next Instagram Introduces Hyperlapse, A New App That Allows You to Capture Time-Lapse Videos While in Motion »