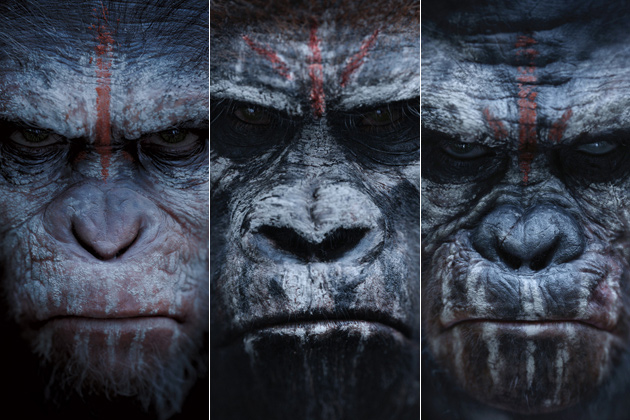 Dawn picks up some years after Rise ended with the humanity pretty much almost killed off by the fatale airborne released in the first film. It is unknown how much of the world has survives, but it is very few. First we meet this tribe of genetically enhanced Apes lead by Caesar. They have built a home for themselves in the forest and have even started families in the small civilization. It isn’t until one day when Caesar’s son Blue Eyes is moving through the forest one day and stumbles upon a human. The human, scared, draws his gun not knowing if the ape will attack or not. After being surrounded by Caesar and a very large number of Apes and Gorillas Caesar warns the human, who is accompanied by a small group of others, to go back where they came from, and to never return.

The films antagonist is Caesar’s right hand ape Koba. Koba, one of the apes that Caesar set free in the first film doesn’t trust the humans, who return asking for help for a specific taste that they need for their survival. Koba is vicious and ruthless, but wise enough to know that humans normally reject what they don’t understand. Caesar, being raised by humans, knows they are not all of them are the same. Koba eventually sets plans in place and Caesar’s mission to have peace with the humans is crushed and war breaks lose.
One of the things about the movie that i found interesting is how it draws such a parallel to todays society. No matter how much peace Caesar tries to keep among is apes when it comes to the humans, Koba, and even Caesar’s son, are not convinced because one of the humans is just as prejudice as the apes. The apes don’t trust the humans, and the humans don’t trust the apes. But they both want the same thing. Peace.

The movie also has its slow points. It takes a little while to get to the action. The movie takes a little while to get to the interesting parts because it does spend a good amount of time explaining how the current state of the world is, with both the humans, and the evolution of the apes. Just like the first film took a little while to get to the action filled parts, you were still a bit more invested in watching Caesar grow up. In this one we take time to see how humanity has crumbled at the knees of this fatale disease and how they are struggling to bring things back to normal, and will go through any means necessary to get back to where they were. It’s actually kind of a shock who starts the war in the film, and we are definitely going to have a 3rd film in the next few years. This one was definitely worth it, so I’m sure the third one will be as well.