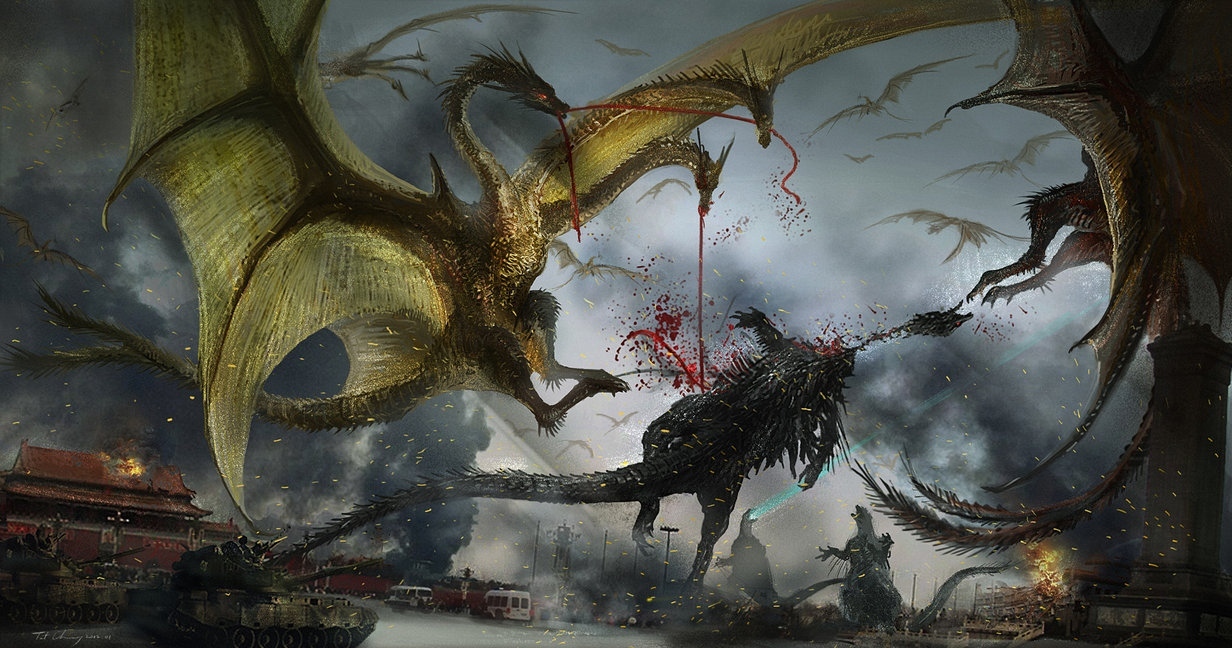 The story of Godzilla has been told about 300 different ways. The crux of the story is a big huge dinosaur the size of Gabby Sidibe terrorizes the the United States. Sometimes he’s good, sometimes he’s bad. Depending on the directory. The city of choice is usually New York City because everything happens in New York city. In this movie is was pretty much everywhere.

The first 40 minutes of the film you don’t know what the fuck is going on. And nobody bothers to explain it to you. Its starts off with 2 doctors discovering a huge whole in the ground which turns out the be the grave of a big huge dinosaur who we would assume is Godzilla. Only to discover that something WAS there, but has moved on. So we are left to assume Big Godzilla had a baby…which has decided to move off the island and into the ocean. How something that size can stomp around unnoticed, is never explained. But who am I to complain. I’m just trying to stay awake. Any-who. What is left behind his this huge “breathing” rock that seems to always give off some electric current and tons of radiation. Please know this, the word “radiation” about 700 times. And it is always, and i mean ALWAYS yelled at you.

Its exhausting. I barely know what radiation is, and i don’t care.
Anyway, the scientist who are stalking baby Godzilla set up shop around the big radiating rock and they sit there for the next 15 years studying it. And one day the rock is “radiating” so much they decide to shut it down.
“Kill it!” The lead scientist screams at the rock.
So they kill the rock.

Only for a big humungus BUG BAT to crawl out of the ground knock shit over and fly off.
This is exactly how the movie went. We don’t know where the big random bug came from. Just popped out of the radiating rock that they’ve been studying for almost 20 years. How a bug that large can go unnoticed…who knows. I guess the same way the big dinosaur swimming about the atlantic ocean can too.

So now that the big flying bat bug is on the lose, the scientist are going crazy calling military and launching all kinds of attacks on the bug. The thing is flapping about the city, destroying pretty much everything looking for something to eat. What does it want to eat? You guess it…radiation.

Then baby Godzilla, who isn’t a baby anymore, emerges to fight the big bug. Or like the scientist believe “To restore balance to nature.” Implying the big is something natural, and Godzilla naturally shows his face when the bug does.
Godzilla’s grand entrance is so dramatic is causes a tsunami. Kills hundreds of people. Takes out countless buildings. Cause so much damage the United States begins to look like a 3rd world country. It’s really a big hot mess.
The rest of the movie is spent with Godzilla tracking and attacking the big radiation thirst bug bat, who actually is seeking it’s mate which is an even BIGGER bug thats been HIDING somewhere in the united states, UNNOTICED just like baby Godzilla and the original bug.

Theres a love story somewhere in here, but the actors are nobody, and you really don’t even care because you spend the entire movie so confused and bewildered.
The movie was ridiculous. I kept scratching my head wondering WHAT i was watching. And the only thing that kept me awake was the doctors yelling
“THE RADIATION!”

The destruction of the WORLD is pretty cool i guess, but nothing you can’t see when the next Transformer’s comes out. At least we know they’ll have a plot following all the destruction they cause. This movie consist of a big dinosaur fighting two big bugs while the military runs about screaming “RADIATION” and doing absolutely nothing.
Don’t waste your time, your money, or your brain cells on this movie. It probably one of the dumbest Godzilla’s I’ve ever seen.