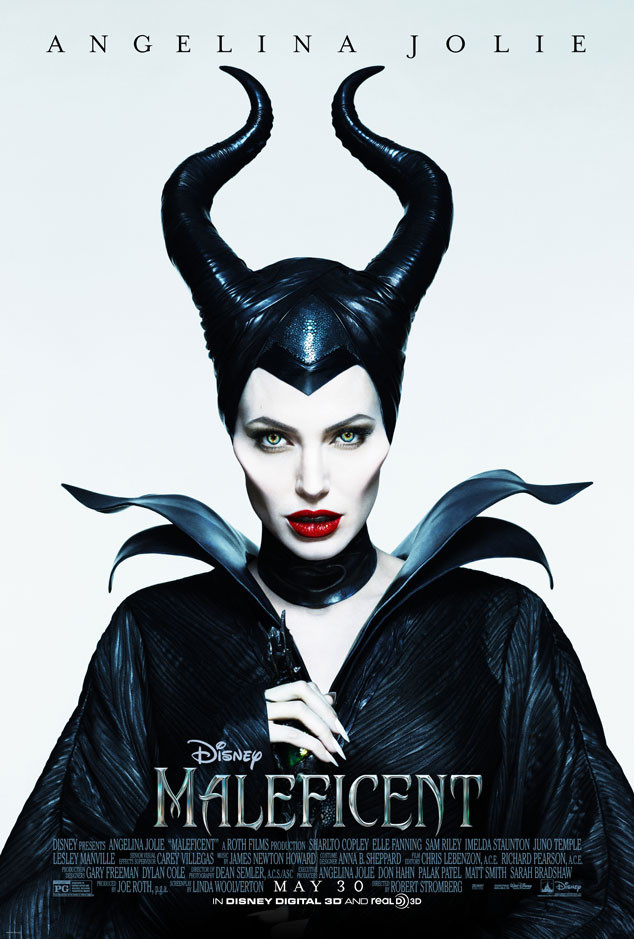 When I sat down in the movie theatre to see Maleficent, i just knew I was going to get the most notorious, evil, vile, and unpleasant villain a PG Disney movie would deliver. I knew she wouldn’t be ripping throats out like and eating hearts like Charlize Theron in Snow White and The Huntsman just because of the rating. But I expected something close. Well…how wrong was it. Maleficent, the most NOTORIOUS Disney villain of all time was about as mean…as Mother Theresa.

Well all know the story of Sleeping Beauty. And if you don’t shame on you. Maleficent, the evil Witch (who apparently is a fairy, not a witch) is highly insulted that The King and Queen does not invite her to their 1st born’s christening. Because of that, she curses the child, swearing that upon her 16th birthday she shall prick her finger and fall into a “death like sleep” (it was a strong curse, because the person i was with, fell into a death like sleep until the end of the film) that only true love’s kiss could break. And then storms off and commits all kind of other devious crimes until the end of the movie when she turns into a dragon and is slain by the Prince. Blah Blah Blah

Well Maleficent this movie, totally rewrites that story. All together. Even down to who kisses The Sleeping Beauty to awake her. And please know, its all total bullshit.

What Works For Maleficent?
Angelina Jolie.
She’s probably the only redeeming factor of this movie. She’s stunning. Completely stunning, throughout the entire movie. She so captivating she actually kept ME from falling into a death like sleep because everyone else is quite boring. Aurora, played by Elle Fanning, is a snooze fest. She’s hopeless cute and always running around smiling and laughing. You’re over it within about 10 minutes. But Angelina. Her pertruding check bones. Her red lips. Her horned crown. Yes. But not even the flawless Angelina Jolie can hold a whole movie on her own back.

What Doesn’t Work For Maleficent.

Maleficent isn’t “maleficent” AT ALL.
The movie should have been named “Maleficent gets upset.” Because thats clearly all that happens. The biggest problem in the film is that you never believe Maleficent is bad. The only time she raises her voice is when she casts the curse at the Christening. Aside from that, we watch Maleficent crack small jokes and pretty much get over being betrayed by a greedy young man, whom she has feelings for, who grows up to be the King. She isn’t evil. She isn’t mean. She isn’t vile. She’s so damn kind and loving, at one point, she actually tries to take the curse back! GIRL! Give me my money back!

They ReWrite the Entire Story Of Sleeping Beauty.
Sigh. Why? This is probably the most disappointing. Aside from turning the most wicked of witches in the history of Disney Movie witches, into Mary Poppins, they retell the entire story differently. Why? What was the point of the film then? Because from the previews I gathered that we were going to get Maleficent’s side of the story, not a while different fairy tale. Because thats exactly what we got. And thats not what anyone signed up for.

Is the movie it’s self terrible? No. It’s not. Its just disappointing. The acting isn’t bad. The scenes are beautiful. Angelina is just as charming and captivating as you would imagine her to be upon her return to the big screen. But the script lacked any real excitement. The twist that is supposed to shock you at the end, really isn’t shocking at all. Not if you’ve been sitting there for the last 45 minutes watching Maleficent play step momma because the 3 fat fairies the King leaves Aurora with are so dumb they don’t to know how to even feed the child. The movies only an hour and 30 minutes, so unless you want to be put into a death like sleep, i wouldn’t suggest seeing the movie. Unless you’re a hardcore Angelina Jolie fan (like myself). Because from the looks of it those are the people who only even like the film a little.