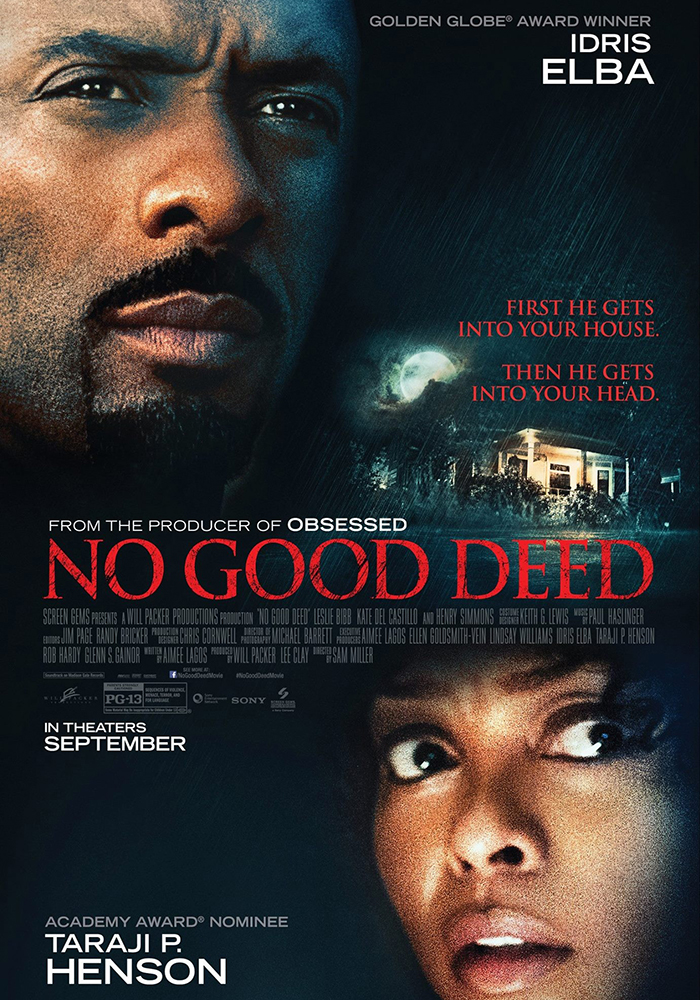 In No Good Deed we watch Idris Elba play the exact opposite of the character he portrayed in Good Deeds, a psychotic serial killer who has escaped from prison. A play on titles perhaps? After spending 5 years in prison for the murder of five women, Idris finds his way to escape. After wrecking his run away vehicle, he stumbled upon the home of Taraji P Henson, who is alone with 2 kids. The rest of the movie we watch Taraji P Henson fight and try to come up with elaborate ways to escape the man who terrorizes her and her two kids.

No Good Deed takes off kind of quickly. Which explains why it was only 1 hour and 20 minutes. You know exactly where the movie is going as soon as it starts. It wastes no time getting to the point. The characters aren’t really developed, but you are told just enough about them to see their purpose in the movie. We see Taraji as an exhausted house wife who’s husband baerly pays her any attention. And we watched Idris go to a parole meeting and plead his case as to how he has changed over the last 5 years in his prison. That is about all we get until the movie started.

The movie was not a bad movie, but it wasn’t exactly great either. The plot was a little weak, and rather predictable. The ending is supposed to have a slight plot twist, which explains why Idris Elba came to Taraji’s house in the first place, and it wasn’t just a coincidence. It was really kind of a good Lifetime movie. And if you’ve ever watched a Lifetime movie you know that even a good one isn’t good enough to make it to the big screen. But I can’t say that it wasn’t slightly entertaining. It had some really suspenseful moments when you didn’t exactly know what Idris was gonna do, or where Taraji was going to turn. The entire movie takes place in the middle of a really bad storm, so of course that makes it even more thrilling. The movie definitely keeps you wanting to watch, the best it can, even though you know they aren’t really going to kill Taraji.

The movie wasn’t a waste of money but definitely not something I would suggest you to run the movie theatre to see. The two black actors definitely held their own, and definitely have a respective fan base. So I wouldn’t be surprised if the movie finished at #1 this weekend. Especially with next to no competition in the box office. Idris will always fill a theatre with women. And the movie definitely plays up his sex appeal. Even Taraji’s character finds it hard to be around him in the movie, often losing her breathe when he takes his shirt off or staring at his back as he walks pasts. Of course until he tries to kill her.