Movie Review by Jonathan Stroughter /// The Other Woman 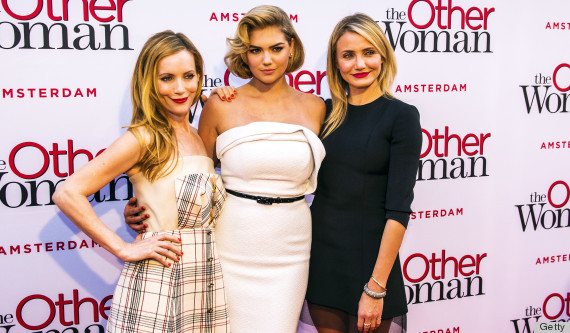 So I wont lie, i’m not really a huge fan of chick flicks. So I wasn’t exactly going to race to the theatre to see The Other Woman. But I know Nicki Minaj was making her acting debute, and i am a closeted fan of Cameron Diaz, so i bit the bullet and went and saw the movie.

Carly Witten (Cameron Diaz) is a successful attorny who pretty much has every aspect of her life together. She is clearly well paid, a office with a view, and a beautifully laid out condo. Her sassy assistant, played by Nicki Minaj (who brought her collection of wigs to set with her) patronizes her regularly about her “team” of men she refuses to take seriously. That is untill she meets the very attractive Mark King, who sweeps Carly off her feet almost immediately. He’s successful, good looking, attentive, and they have tons of great sex. Everything a woman could ask for. Except for the fact that Mark is actually married. Upon making this discovery Carly bails, but not without getting the attention of his wife Kate (Leslie Mann) who is a stay at home wife, who has no one to confide in with the except of her Great Dane. Kate is annoying, worrisome, dumb as a box of rocks and extremely dramatic, but her character is completely hilarious. When they two women then discover that “their” man has a 3rd mistress, Amber, played by Kate Upton (and her enormous breasts) they launch a full out mission to annihalate the man and make him pay for his adulterous ways. In doing so, the women actually become really good friends, and form a sisterhood.

Leslie Mann really brings the laughs. Her character being so witless and dumb make her so loveable. She spends much time in the movie completely drunk trying to ease the pain of finding that her husband is a 3 timeing theif. Cameron Diaz’s character is a tough love tell it how it is type. She’s stern and aggressive. And not that you didn’t know this already, but she’s exceptionally hot throughout the movie. Kate Upton doesn’t bring much to the movie at all except for her large breasts, which is what we constantly see. She maybe has about 10 lines the entire movie. Even though she is a key character, we don’t learn much about her, i guess because there isn’t much to learn. She’s pretty and dumb. And thats about all she gives us, pretty and dumb. Nicki Minaj on the other hand is cute and witty. She does well for her debute movie role. Her character isn’t complex or very present throughout the movie, but when she is there you definitely notice her. I love that she didn’t shy away from her thick New York accent as well. Or her wigs, or her body con dresses, that I’m sure some were apart of her Nicki Minaj collection. You can find that at Sears.

I would definitely recommend checking the movie out though. The plot is slightly predicactble, but the movie is still a good time and filled with laughs. Most chick flicks end the same so thats no shocker, but its definitely fun to watch the women fight with each other, plot on the man, and stumble all over the place trying to take him down in the end. You won’t be disappointed. Especially in Kate Upton’s rack.