Movie Review by Jonathan Stroughter /// Think Like a Man Too 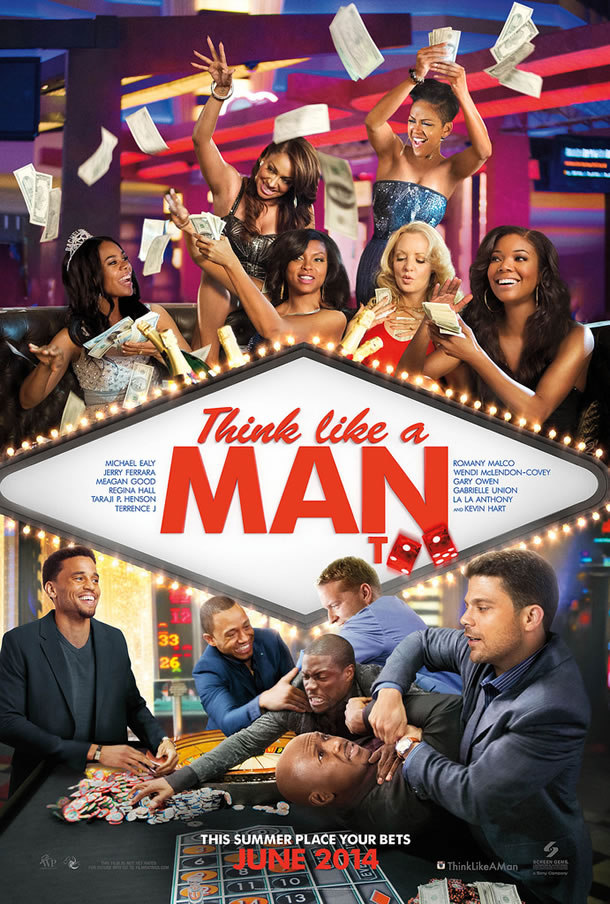 After the success of the first Think Like A MAn I don’t think anyone was shocked when they announced the sequel. I’m personally, am not a huge fan of Steve Harvey (or his oversized suits) nor do I want relationship advice from a man who’s been divorced 3 times. But thats none of my business. But he did something right when he wrote that book, because Think Like A Man turned out to be a great movie about relationships. And the sequel wasn’t bad either.

In this film we are following the gang to Las Vegas to celebrate the nuptials of Terrence J and Regina Hall’s characters. And to of course, to enjoy their last night single with their boys. Or girls. Both the best man and the maid of honor have a list of things for the respected soon to be newly weds to do. And its their mission to carry out those things. But as the theme of every Las Vegas movie goes, the night is filled with accidental drug use, strippers, fighting, and mug shots. Making the movie as hilarious as it wants to be. All while keeping it PG-13.

Kevin Heart owns the movie. He’s the best man. And that title apparently meant that director gave him the free will to do whatever came to the little man’s mind. He runs around like a jack rabbit the entire movie yelling and screaming all while avoiding his wife’s phone calls (played by Wendy Williams). He’s a hot mess. But thats why we love Kevin. He’s hilarious, irrational, loud, crazy, and tiny.

We don’t get much relationship talk in this movie, which was kind of weird because that was basically what the first movie was built on. This one is more of a comedy. And in the last 15 minutes they wrap up the small relationship problems we did have with simple solutions that are kind of no brainers. The one issue that carries over from the first film, Terrence J’s overbearing christian mother, Ms Loretta (or Ms Whore-etta as the women refer, because Christians are can enjoy one night stands too) is still meddling in the couple’s life and relationship throughout the movie. She is probably the most prevalent problem that we see played out, but that to, in the last 10 minutes with the other small relationship bumps, are wrapped up and smoothed out in the blink of an eye.

In the day when most sequels are terrible, Think Like A Man Too held its own. The movie is quite entertaining. Definitely something worth seeing with friends and family. It holds to its PG-13 rating, so as wild as things get, its still no HangOver or BridesMaid. But its definitely hilarious and has quite the funny situations that keep you wanting more.