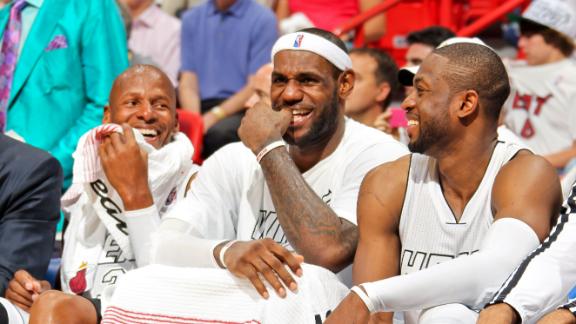 King James, Black Mamba, Jesus Shuttlesworth, The Truth and KG might be headed to the backs of NBA jerseys.

Some members of the Miami Heat have been told the NBA is considering having them and theBrooklyn Nets wear “nickname jerseys” in at least one of their four matchups this season. The NBA has not announced the plan, but teams apparently have been aware of the likelihood of it happening for at least several weeks.

For now, only the Heat and the Nets would be taking part. It’s unclear how many times those teams would wear the nickname jerseys or whether they would ever wear them against other opponents.

“It shows growth in our league and it shows we do adapt to what’s going on around us,” said Ray Allen, the Heat guard who plans to wear “Shuttlesworth” on his jersey, a nod to his character from the film “He Got Game.” “And we’re still kids, playing a kids’ game. Even though we’re now men playing a kids’ game, we still remember where we come from. Everybody had a nickname, and it’s a way to let the fans in a little bit more.”

Players were asked to submit what names they would want on the jerseys.

“I think it gives players a great opportunity to frame their brand by picking a name that tells their story or further communicates what they represent,” Kobe Bryant told ESPN.com’s Darren Rovell.