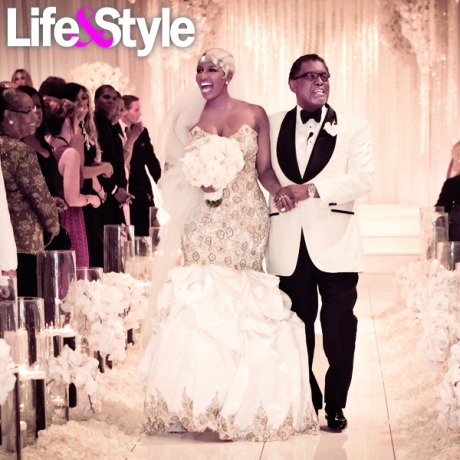 Nene Leakes shows off how “very rich” she is once again, and looking GAWJUSS doing it honey #boop. Over the weekend, “RHOA” star Nene Leakes re-married her ex-husband Gregg Leakes in an Old Hollywood-themed wedding at the Intercontinental Buckhead Atlanta Hotel.

The bride wore a $50,000 Baracci dress for the wedding, before slipping in a $20,000 Pnina Tornai dress for the reception.  She had nine bridesmaides dressed in white Gabriella Arango gowns.

Gushing about the extravagant ceremony to Life & Style, she said “I feel amazing. Both of us want this, so it will definitely work this time. I know exactly what I’m getting myself into.”

Nene, who coordinated the wedding with event planner,Tony Conway, added,

“I came up with the idea of having an Old Hollywood theme because I thought it would be completely fabulous and everyone would be able to have fun with it.”

At the reception, guests sat at tables adorned by three-foot floral centerpieces and feasted on comfort foods like homemade biscuits, mac ’n’ cheese, shrimp and grits, and fried chicken. Following the meal, attendees dined on a custom 10-tier cake filled with vanilla cream.

When asked about the most memorable moments from the wedding, Nene talked about being walked down the aisle by her sons Brentt Leakes and Bryson Bryant. “That was so emotional for me,” Also, “And Gregg telling me I was beautiful — that was really special. I had a lot of teary moments.

YAS Nene, I just fell in love with her all over again.