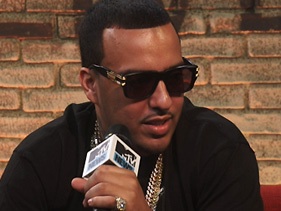 French Montana posted the picture above on his IG today and it went viral! French recently collaborated with Nicki Minaj on his new song “Freaks”.

French stopped by MTV studios to chat it up with Sway about the new song:

French Montana‘s debut album, Excuse My French, includes some unexpected collaborations — like that track with the Weeknd — but the Bronx rapper wasn’t going to put out his studio project without an appearance from another major New York MC.

Nicki Minaj joins French on the new single “Freaks,” which fans have been clamoring for since he initially announced its existence a few weeks back. At this point, French has quite a few club bangers under his belt, but the dancehall crowds will definitely appreciate this one as well.

Rico Love sampled Li’l Vicious and Doug E. Fresh’s “Freaks” and Chaka Demus & Pliers’ “Murder She Wrote” to create the new single, which will probably still be in rotation when summer rolls around.

French said it was a no-brainer to get Nicki on the track, since he was doing it for New York. “I just felt like she was one of the hottest female artists to come out of New York in a while, and I felt the same about me,” he explained on Wednesday’s episode of “RapFix Live.” “So I felt it was a record that’s more for the city — [you] see two people that’s doing real good put a record together.”