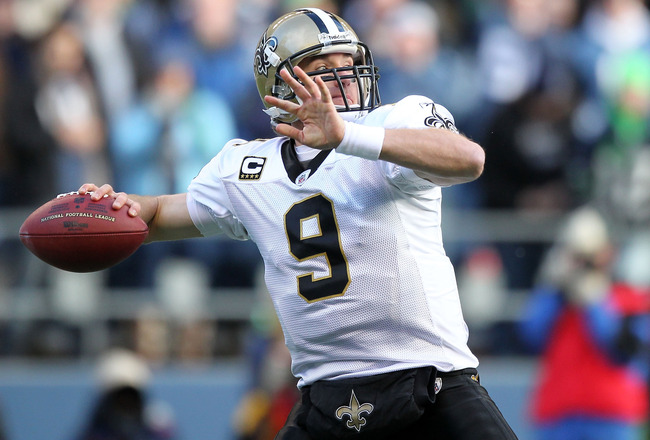 FIVE THINGS TO WATCH ACCORDING TO NEWORLEANSSAINTS.COM FOR TONIGHT’S MATCHUP VS. SEATTLE SEAHAWKS..

1. LEASH THE BEAST: Seattle has the third-best rushing attack in the league (147.9 yards per game) and it’s no secret what the Seahawks are going to do: They’re going to look to pound the New Orleans Saints on the ground with running back Marshawn Lynch (925 yards and nine touchdowns on 208 carries). Saints defenders, and all of their fans, are quite familiar with what Lynch can and will do if he’s allowed to shift into “Beast Mode.” So containing him, and forcing quarterback Russell Wilson to throw the football, is Priority No. 1. Forcing teams to be one-dimensional is every defense’s goal, but it applies even more so with the Seahawks. The Saints have chopped up the running games of Dallas, San Francisco and Atlanta in the last three games, limiting each to fewer than 100 yards rushing. That’s the kind of result they’ll need to take down the Seahawks.

2. HUSTLE FOR RUSSELL: Speaking of Wilson, here’s an interesting fact: The Seahawks’ second-year quarterback has been sacked more times (29) than has Saints quarterback Drew Brees

(23), even though Wilson has attempted 158 fewer passes (304) than has Brees (462). What does it all mean? It means that the Saints, who are tied for the NFL lead with 37 sacks and lead the league in sacks per pass play, should be able to get hands on Wilson. Wilson is mobile, enough to have 409 rushing yards on 72 carries. But Seattle’s offensive line obviously hasn’t been a brick wall in terms of protection, and keep in mind that Wilson has fumbled eight times this season, and lost five of them.

3. GROUND ‘EM DOWN: As heralded as Seattle’s defense is, the Seahawks haven’t had all that much success stopping the run. Opponents have 1,242 yards against them this season, averaging 4.2 yards per carry. The Saints, who have a renewed zest in their running game, have averaged five yards per carry, on 86 carries, in the three games leading up to this one. Balance always helps and New Orleans has been better balanced the last three games than at any time this season, which explains how the Saints were able to win three games in 12 days. Inclement weather in Seattle won’t prevent New Orleans from throwing – the Saints are going to do what they do best – but if the statistics are correct, they should be able to lean on the run for support.

4. CAREFUL, DREW: Considering the amount of times Brees has thrown the football this season (439), having just eight interceptions is outstanding. Seattle, though, invites the attempts. The Seahawks are second in the league in pass defense (they allow 180.4 per game) and their 16 interceptions are tied for the league lead. The Legion of Boom, as the secondary has labeled itself, only has allowed 12 touchdown passes and opponents complete just 58.6 percent of their passes. This will be a strength vs. strength battle, which could be swayed by the presence of …

5. JIMMY GRAHAM: Doesn’t it always seem to come back to Graham, one way or the other? The Seahawks may be tempted to copy New England’s defensive gameplan against the Saints’ unparalleled tight end – namely, put a great cover corner on him (maybe the loquacious Richard Sherman) and take their chances one-on-one against the other receivers. That worked for New England. But the Saints now have a healthy Marques Colston

and a sneaky-productive Robert Meachem

, not to mention Pierre Thomas

out of the backfield. The Saints figure to win their share of one-on-one battles with that corps and if they win enough of them, they could leave Seattle tied with the Seahawks for having the best record in the NFC, and owning the tiebreak over Seattle.