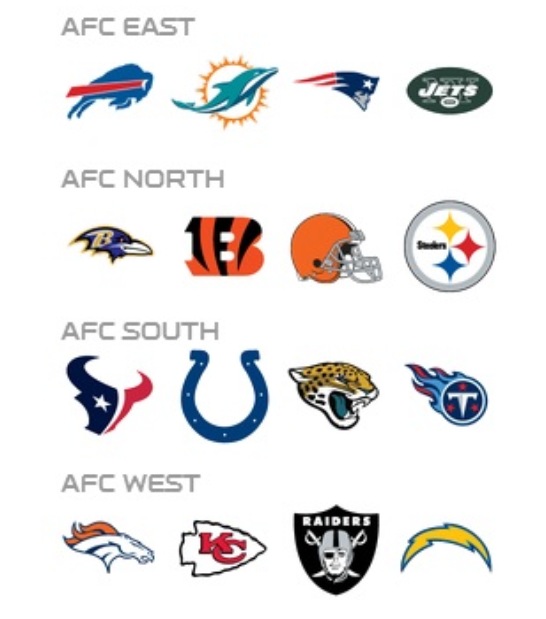 The Patriots will miss Aaron Hernandez and Wes Welker severely as the season unfolds but their Offensive Line issues and lack of good Running Backs look ultimately to be what will lead to their dimise. Nonetheless New England still has Brady and Belichick in addition to a weak division. They get in the playoffs.

Buffalo has reason to be excited with all the young talent they accumulated over the offseason. E.J. Manuel and a slew of young Receivers coupled with a good one-two punch out the backfield will make the Bills a tough out all year.

Dolphin fans might as well get ready for basketball season. Tannehill is better but doesn’t have enough around him to make some noise in the AFC. Mike Wallace isn’t going to change that offense without a viable threat on the other side.

A pure mess. They have a young QB that is bound to fail. No Receivers if Holmes decides to sit all year. Add questions on a revamped Defense all point to disaster.

The Steelers have a lot of skeptics but the addition of Felix Jones will make a world of difference for the offense and Jarvis Jones will make an instant impact on Defense. Throw in the fact their archrival is sitting on the throne is just the incentive the Tomlin led bunch needs to push them to the top of this tough division.

The young Bengals are poised for a real push at the AFC crown this year. They seem to have all the parts and players in place to really take control of the division but inexperience of playing in big games with expectations of truly winning are going to be new for this bunch. It may take a few weeks for the Bengals to settle down and find their groove. I think Cincinnati will be a force come January.

Super Bowl hangover will be in full effect in Baltimore this year. The overhaul of the roster added to some hefty paydays spell average effort from this group of birds. This division can send three teams to the playoffs and the Ravens may very well be the team looking to sneak in at year’s end.

Brandon Weeden’s preseason performance has Cleveland optimistic about the year’s chances but unfortunately they play in the best division in the NFL from top to bottom. Trent Richardson, Weeden and a gritty Defense will make life hell for every opponent on the schedule.

Clearly the class of the South in the AFC the Texans are just waiting to exercise postseason demons.

Andrew Luck is going to have a better year this year compared to his rookie campaign but his team will regress in the win column. Emotion and unpredictably of their new parts drove their playoff push last year this year they won’t be so fortunate.

Do or die year for Jake Locker in Tennessee. He has the weapons and the support but i don’t think he has the game under his belt enough to make a difference either way in the playoff race. Last year of Chris Johnson as we know him.

Should sign Tebow! What do they have to lose? At least they could sell tickets while they lose.

Von Miller’s suspension will put a little suspense in a season that will ultimately be judged on Denver’s postseason performance. They’ll run away with the division crown once Miller gets back.

Chasing their tails maybe the best way to describe the San Diego Chargers. They just find a way to be average every year. This year will be no different.

Andy Reid’s Offensive gameplan will be refreshing for Alex Smith and Kansas City faithful. Jamal Charles is key to any success the Chiefs may have this year. If a few things bounce their way the Chiefs could find themselves in the postseason.

Previous « Eva Marcille Gushes About Pregnancy Surprise
Next Rich Gang Featuring R.Kelly “We Been On” Video »