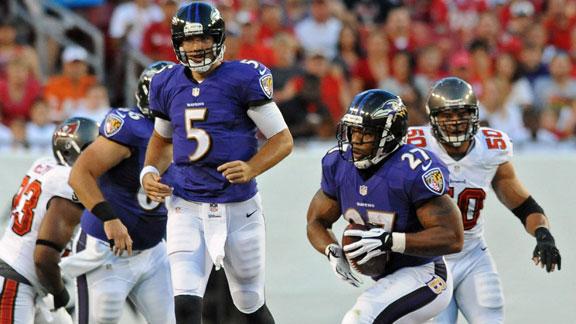 The Baltimore Ravens got off to a slow start in Tampa, not scoring any points with their starting offense. The Buccs starters put a nice drive together and did get a field goal off a Flacco pick. Tyrod Taylor got going in the 2nd half but was steady overall. This win was led by special teams, defense and ball protection. The defending champs have some work to do.

Josh Johnson was the star of this show. The 5th year pro accounted for 164 yds and a TD but impressed me more how he moved the chains. Cincinnati has to be pleased wit their CB and RB depht as well. Atlanta’s starting O-line looks really shaky but the Falcons must be encouraged by Rookie Steve Alford’s play in the secondary.

This appears to be the best Cleveland team I have seen since ’08. Weeden seems to be settling in as the starter leading the Browns to scores on his only two possessions. He finished the night completing 10 of 13 passes for a 112 yds and a TD. If Cleveland is the worst team in the AFC North, wins will be hard to come by in that division.

This was the best game of the weekend. No turnovers for either team led to a smooth flow but the Skins QB depth is what really stood out. Each QB for Washington led the team on Touchdown drives. Tennessee’s running game looks to be strong again with the addition of Shonn Greene but Chris Johnson showed some signs of his explosive play returning with a 58-yard TD run. RGIII did not play.

The Broncos and 49ers played in a defensive struggle at Candlestick Park in what many think could’ve been a Super Bowl preview. Both starting Quarterbacks only played a series a piece but both defenses looked solid. Shaun Phillips returned a fumble recovery for a 9 yd score notching the game’s only TD.

The Chargers starting units looked good on both sides of the ball but Seattle’s depth was hard to ignore. Tarvaris Jackson and Christine Michael powered to Seahawks to a convincing win. Jackson was damn near perfect going 8/9 in the air passing for two scores and no turnovers. Michael and LSU alum Spencer Ware looked good showcasing the Seahawks depth a RB.

The Giants and Steelers opened their seasons at Heinz Field on Sat. night but Eli Manning and Victor Cruz appeared to be in midseason form though. The duo connected for a 57-yd TD pass in the tail end of the 1st quarter. It was a mellow start for to established contenders.

Buffalo didn’t surprise me on Sunday as much as they validated my existing thought, the Bills are about to circle the wagons. They maybe a year away but the young QB and receiving core drafted this year give first year coach Doug Marrone optimism for a bright future. E.J. Manuel looked very mature as he played the entire 1st half. He completed 16 of his 21 passes for 107 yards and a TD and added 28 more yards on the ground. He wasnt the only Bills Rookie QB that had a good day. Jeff Tuel had an outstanding outing himself. The former Washington St. Cougar was 19/23 for 212 yds and passed for two scores. Fellow rookie Marquise Goodwin also showed us a taste of his world class speed by returning a Kickoff 107-yards for a score.

All pictures were provided courtesy of NFL & Google