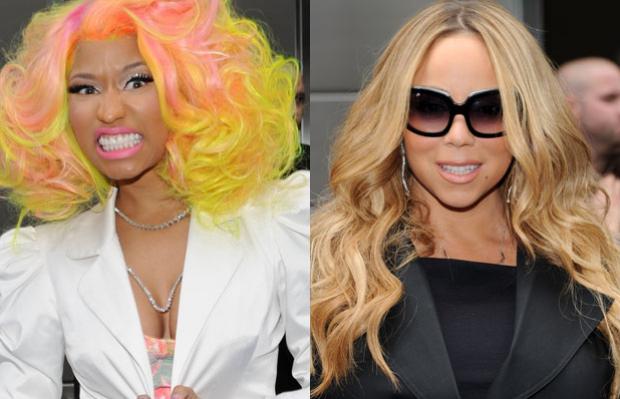 Last week on the Wendy Williams show, she explained that Mariah needs to understand that she is an iconic figure but she’s not the big man on campus anymore and these young girls are not scared of her. I totally agree with Wendy. According to Wendy’s sources Mariah would throw unnecessary slangs every time Nicki made a comment or gave feed back to contestants; in other words Nicki didn’t back down. As the comments continued Nicki got louder until everything exploded. From a minute of footage, it’s clear who won the argument. #SpeakOnIt

Here is what TMZ is reporting:

In the footage, obtained by TMZ, Nicki is clearly furious … shouting, “I told them I’m not f*ckin’ putting up with her f**kin’ highness over there.”

Sources say Nicki later threatened to “knock out” Mariah … but she said it before the video starts.

It all went down while the two were sitting at the judge’s table … with Keith Urban sitting in between them and Randy Jackson sitting on the far end, next to Mariah.

We’re told the whole thing exploded over a disagreement over a contestant’s performance.

Listen closely as you play the video … you’ll hear

Nicki  Get this s**t in self control.  Get in control.  Get in control.
Randy  Settle down, settle down
Nicki  Don’t lose your head.  Don’t lose your head (inaudible).  Don’t tell me I’m a gangster.
Nicki  (inaudible) every 5 minutes.  So every time you patronize me, I’m-ma take it back, and if you’ve got a f**king problem, handle it.
Nicki  I told them I’m not f**kin’ putting up with her f**king highness over there.  Figure it the f**k out.  Figure it out.
Nicki  I’m not gonna sit here every f**king minute to have you come down and harass me every minute everyday.

Mariah is talking back at Nicki but it’s hard to hear what she’s saying.

According to our friends at MouthToEars.com, producers ended the auditions for the day so the two judges could cool down.  We’ve confirmed that happened.

Big wigs on the show seem uncharacteristically upset by the blow up.  It seems producers are worried about Mariah and Nicki co-existing for the long haul.