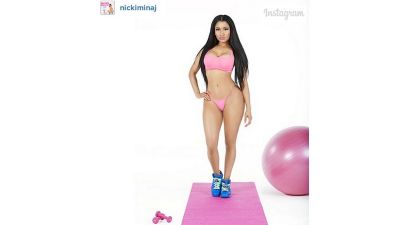 After causing quite a stir online with the artwork for her single, “Anaconda,” Nicki Teresa posted a more prim shot from her pink workout bikini photo shoot and pushed back the drop date for the song.

“My darlingz, I’ve pushed the release of Anaconda to next week, Monday 8/4,” she wrote via Instagram. “I promise you will understand why before the week is out.”

The cover art, a picture of her squatting with her back to the camera, coyly looking over her shoulder, immediately received questions, backlash and a T-shirt after she revealed it last week.

Since then, she’s re-posted many of the memes that have been circulating along with a selection of more women similarly posed in thongs. “Acceptable,” she captioned those photos. Her own, she captioned with “Unacceptable” and a winking emoticon.
“Anaconda” was supposed to release July 28. The day before, however, she sent out the delay announcement.