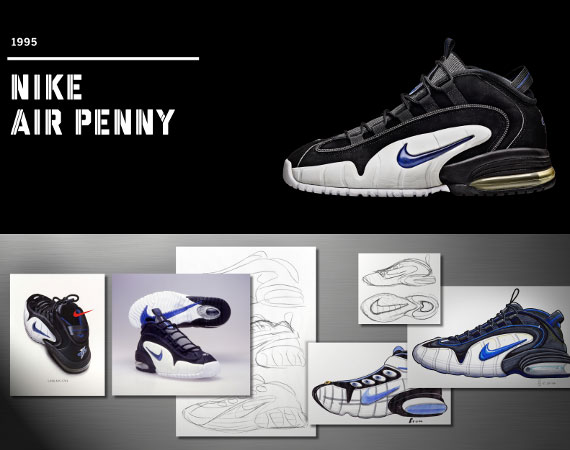 Nike‘s summer of basketball, in which the brand profiles “20 Designs that Changed the Game,” has taken us to the Air Force 180 Low, Air Flight Huarache, Air Raid, Air Max2 CB, and now the Air Penny, originally released in 1995. Penny Hardaway’s distinctive style of play, highlighted by a combination of both explosive speed and strength, gave rise to the birth of the Uptempo line. Lead designer Eric Avar recalls, “We had Flight and Force and we were looking at trying to dimensionalize the basketball line around this notion of versatility and that’s kind of what Uptempo was.” The shoe was equipped with a Max Air heel unit and the newly developed Tensile Air up front, which would later be known as Zoom Air. Meanwhile, the shoe’s 1 Cent logo and crystal Swoosh gave nod to the player’s confidence and uniqueness. As Avar explains, “I studied Penny’s style, his game and the product just took shape from there.”