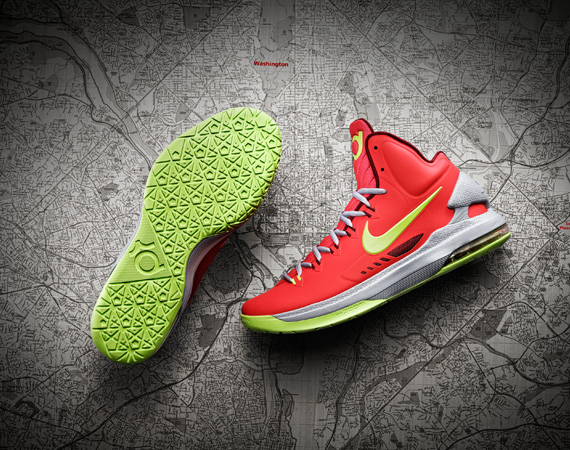 Before going into the design phase, there was little doubt in Leo Chang’s mind that Kevin Durant‘s fifth signature footwear will be the most technically advanced one. The perplexing issue for the Nike Basketball Footwear Design Director was how do you incorporate Durant’s personal journey into the final product. In the end, Chang found the answer in the number five. Not just a designation for Durant’s new shoes, five is the number of players on the basketball court at any given time. It is also a symbolic nod to the Pentagon, a landmark in Washington D.C., Durant’s hometown. Chang translated the form into a dynamic outsole tread pattern as well, with design accents to mark important milestones in Durant’s life thus far.

In a high-cut form, an obvious departure from the previous KD signature edition, the KD V combines four foremost technical elements from Nike. A Nike Zoom unit at the forefoot and Nike Air unit at the heel, a proven formula that maximize cushioning without additional weight. Its Hyperfuse construct not only lighten the overall design further but improves the fit too. And finally, an external dynamic heel counter contributes to a greater range of motion and support.

The first colorway of the new KD V will be going back to Durant’s hometown again, this time in Bright Crimson with hints of red, yellow, and black, all in reference to his home state of Maryland. The Nike KD V will be available first as a NIKEiD design option on November 6th, 2012. Then, the Bright Crimson version, along with a Black/Blue edition (for OKC), will be available on December 8th, 2012. VIA FRESHNESSMAG