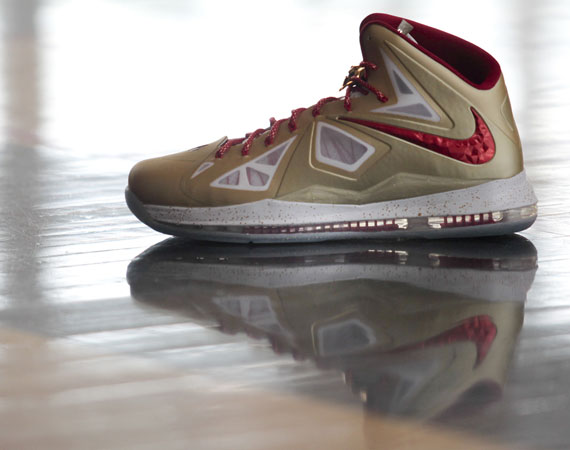 All eyes will be on new Miami Heat guard Ray Allen as the team opens its season tonight with a game against Eastern Conference arch rivals Boston Celtics (and Allen’s former team for the past five seasons), but for sneakerheads taking in the game their eyes will likely be drawn to the shoes on LeBron’s feet. He’ll be wearing specially designed Nike LeBron Xs paying tribute to the Heat’s 2011 – 2012 championship. The gold colorway symbolizes LeBron’s title ring, while the white/red accenting represents the squad’s home uniforms. Additionally, the right shoe’s medial side is printed with “MVP” and the number of points LeBron scored in the playoffs, while the left shoe’s medial side features “CHAMP” and his team’s playoff record. VIA FRESHNESSMAG

Previous « Music: Kendrick Lamar – The Jig Is Up (Dump’n)
Next Famous Brands Create Fashionable Bears For ‘Children In Need’ »