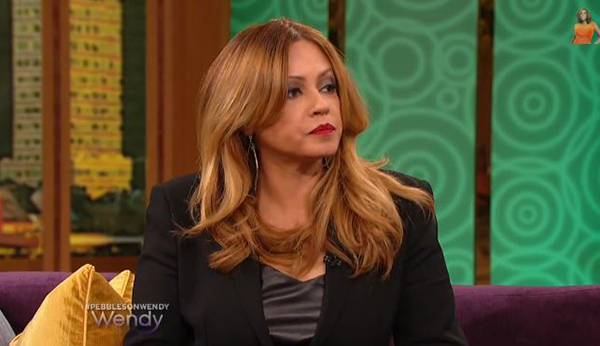 Yesterday, Pebbles stopped by the Wendy Williams show to officially “speak out” about her thoughts on how she was perceived in VH1’s “CrazySexyCool: TLC Story” biopic.

I will give a side-eye to Pebbles because she’s just all over the place with her stories. However, she is going through with her lawsuit even after VH1 sent her a notice saying the movie was NOT based on a true story. I guess the truth shall be told in court. I will keep you guys updated on what happens.

Pebbles says the rumor of her walking in on Chilli & L.A. sexing is not true….because she would have caught a case.  BUT, she does “absolutely” believe they were having an affair because she “saw things”.

Pebbles says that if that’s what you asked for, then that’s what you got.  She basically says the girls of the group had simple tastes.  And they weren’t making Ferrari money anyway.

Pebbles claims the girls DID in fact, read their contracts and signed them knowing what was in them.  “If the contract was so bad, why’d you sign it?”  She said Crystal–the former member who never really became a member–was never actually given a contract despite her saying she was.  Pebbles says she never even made it that far, but she was a nice girl.

Pebbles said she would never give $25 per diem because she’s “so generous” (and she referenced her Giuseppe Zanotti boots she bought to rock on Wendy’s show…for Wendy).   She alluded to people higher up in the food chain (namely Clive Davis and L.A. Reid) who were the ones really making all the money.  As for if she ever “stole” money from the girls, she said “Hell no!”  She said a few times she thought of the girls like her daughters.

She also says it was a total lie that her lawyers were the girls’ lawyers as well.  She said she didn’t know those lawyers (but later in a Huff Post interview says they were L.A. Reid’s lawyers) and simply found an esteemed law office to refer TLC to because lawyers at that time would only take clients based off reputation.  Pebbles maintains that the girls had their own lawyers.

Who really kicked Chilli out the group

Pebbles dropped a bombshell and said it was T-Boz & Left Eye who kicked Chilli out the group….not her!  They were allegedly bothered by Chili’s relationship with their producer Dallas Austin.  And she crossed the line of “group rules” Pebbles told them to make.

“Just because I’m 30, I’m not allowed to be passionate?”  Yeah, she said that…with a shady smirk.