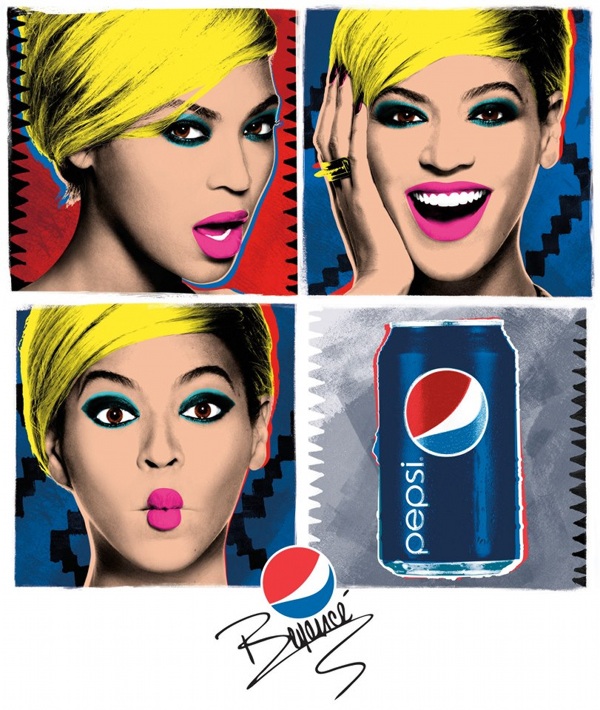 King Bey has teamed up with Pepsi again, this time in an Andy Warhol pop-art way. Beyoncé released the image on her FB page today. The spokeswoman of the soft drink brand is in the midst of her newest major–rumored to be $50 million–deal where she helps design advertisements, projects and receives tour sponsorships from the brand.

The Patrick Demarchelier-shot image will appear in stores and on soft drinks pack starting now.  Bey said about the image on her FB page, “Pop Art inspires me to Live for NOW.”

Mauro Porcini, Chief Design Officer at PepsiCo, said, “Beyoncé and Pepsi truly achieved the ‘Pepsi Effect’ with this collaboration. It was a joy to discover Beyoncé’s current passion for Pop Art, and together make it come alive in a very contemporary way.”

In other Bey news:
Beyoncé made some more history with the numbers she brought in with her HBO documentary and her Oprah interview that aired this past Saturday, proving once again, that she rules the world.

Life Is But A Dream broke the network record pulling in 1.8 mill viewers for its premiere, according to THR.  The previous record was held by Spike Lee‘s 2006When The Levees Broke documentary.

And as for her Oprah interview OWN reports that the special drew in 1.3 mill viewers.