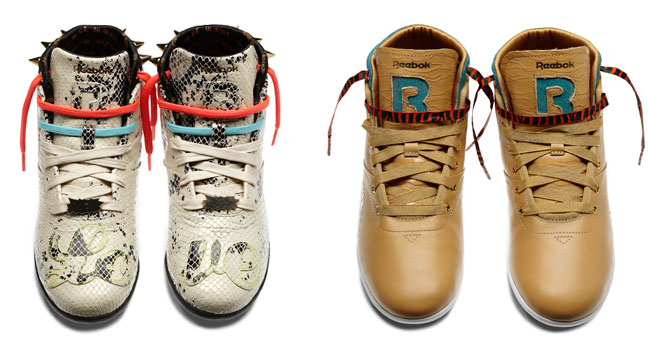 Hot off the Reebok x Alicia Keys announcement from last week, Reebok Classics is announcing its new BEAT Collabs capsule collection, featuring collaborations with 5 female ambassadors around the world who embody the “Classic” spirit. Moreover, Reebok worked with each ambassador to identify five non-profit organizations that empower female entrepreneurs, and a donation will be made by Reebok on behalf of each of the five ambassadors.

For the US market, Reebok worked with Melody Ehsani and Simone “Boss Lady” Amelia to design their own versions of the Betwixt Mid sneaker as a reflection of who they are and what they stand for. VIA GRIND365.com

Background:
Melody Ehsani (www.melodyehsani.com) is an LA based accessories designer who dropped out of law school to pursue her passion for product design. Although her family did not wholly support her decision, Melody used their negativity as fuel for her ongoing success. She now calls Alicia Keys, Rihanna, Amber Rose, Keri Hilson and Angela Simmons as clients and has a successful accessories business.

Charity:
Oprah Winfrey Leadership Academy – chosen by Melody Ehsani, this organization develops educational programs designed for young girls who have demonstrated academic talent and leadership potential. Students are equipped with the intellectual and social skills necessary to assume positions of leadership in South Africa and abroad.

Shoe Description:
Her Betwixt Mid style below features a black and white snake print with black leather trim and gold studs with the word “Love” stenciled in light yellow script across the toes. The style comes with three interchangeable laces in neon yellow, orange and turquoise.

Born and raised in Sydney, Australia and of Middle Eastern/Mediterranean heritage, Boss Lady moved to New York City five years ago and quickly became a familiar face in the music and fashion industries, both for her on-camera interviews with celebrities and behind the scenes work with various popular and emerging clothing brands.

Published in magazines from the age of 17 in her home country of Australia and abroad, she’s interviewed stars such as Jennifer Lopez, Beyoncé, Afeni Shakur, Diddy and more throughout her rewarding career.

Charity:
Youth at Risk – Simone Amelia works with this charity, which functions to enable society’s most disadvantaged, alienated and vulnerable young people to transform their lives and build a brighter future.

Description:
Bossy Lady’s Betwixt Mid style below is made with cream and sparkly turquoise leather with adorned with turquoise jewels, tiger stripe laces and a gold chain at the back. Underneath the gold chain is gold lettering that says Boss Lady x Reebok.