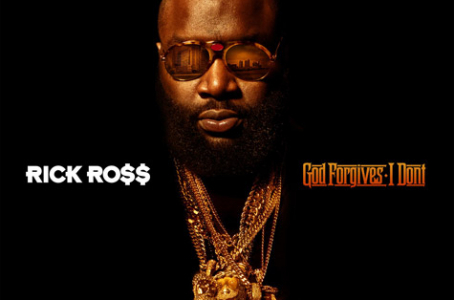 Cinematic, bold, raw, risky, slick, and tasteful are just a few words that can be used to describe how I’m feeling about this album. Alone with plenty A-List features, producers and a sense of anticipation, Rozay’s growth as an artist is extremely evident on God Forgives, I don’t. The homie Ross is taking us on a ride. However the road taken is full of ditches, dark alleys, dime pieces, ten Jesus pieces, pinnapples, Kings, stacks, dope, love and it even takes a dip through Amsterdam.

But even with these twist and turns throughout the album the overall product is that of some not so stepped on raw dope. He’s taking risk with tracks that he doesn’t usually touch while also using familiar friends like Justice League to get in his zone. There are definitely several memorable songs on this album especially a rare feature and some production from Andre 3000. On Sixteen 3 stacks goes in a zone that only the greats know, leaving many feeling like Ross got murdered on his own track. For Ross this was his Jay Z Renegade moment where it was going to be a lose lose regardless for him. While I feel that Ross held his own on the song, it just seems as if it was set up for Andre to dominate the track. Hell I think it’s a testament to the growth of Ross that Andre and King Hov would even give out such potent lyrics to an artist such as Ross.

As for the songs like Diced Pinapples, Presidential,and Touch’n You, all that can be said is, “This is slick talk at its finest”. These joints make you, just want to get on some fly shit. Just drop the top on the whip and ride out with your lady while waving your his and hers Rolex in the sky….This is that Excuse Me Miss,One More Chance type music.

It’s obvious that since Rozay’s first album, Port of Miami his rapping flow, delivery, and wordplay have surpassed what anybody every expected of the biggest boss. Anybody other than Ross that says otherwise, Is A LIE.

I could have never guessed that Ross would still be relevant six years later, oh boy was I wrong. Well at least it didn’t take me the whole six years to realize that Rozay was going for the crown. By the time Deeper than Rap hit the airwaves, it was clear that Ross was competing with the bigs in the rap game.

Now here we are, two albums later, several millions made, and a flourishing music group. It’s safe to say Rozay will be around for a while now. How can you not admire his work ethic and standards. Hell he alomst died because of this game……….