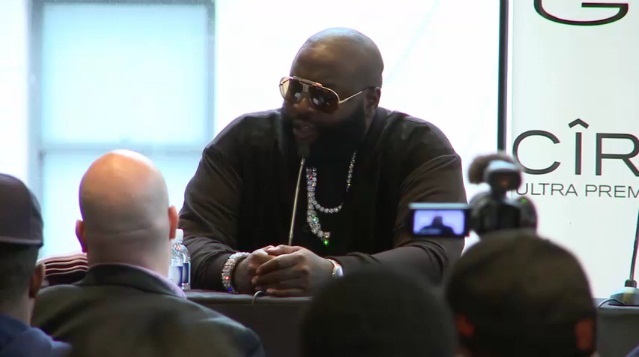 Hosted by Elliott Wilson, this MMG Conference has been heavily speculated upon since its announcement.  An early talk from Wilson was followed by the Warner Brothers CEO heavyweight Lyor Cohen who said the last time he introduced an artist at a press conferences was “about 18-20 years ago when I introduced Roc-A-Fella.”  He’s sees something in Ross because “he’s not caught up in the normal bullshit…  and ended with ”I don’t know anybody who can stop this guy” before introducing the rising mogul and entrepreneur.

“Just studying the game, and out of the love of the art, it just spilled over,” Ross commented on his success with Maybach Music Group.

Swizz Beatz was introduced to announce Rick Ross’ own “Big and Tall” line with Reebok.  ”Ross is into art, he’s into paint as well, he understands Basquiat… Ross has the open portfolio to do whatever he wants to do with that.”  – Swizz

Sean “Diddy” Combs also entered to “celebrate the hard work and success” of Ross.  Waleentered and introduced the release date of “Self Made Vol. 2″ as June 26th. Meek Millreleases his debut LP “Dreams & Nightmares” August 28th.  And Rozay’s anticipated “God Forgives, I Don’t” is set for July 31st.

And for the surprise, the newest signee, Omarion, was announced and confirmed:  ”Today I became a made man.” And introduced his first single, “Let’s Talk” ft. Rick Ross

Finally, French Montana has been solidified for a merger with Bad Boy/MMG.  July 17th is the release date for “Excuse My French.”

Welp, that was a lot!  Opinions?