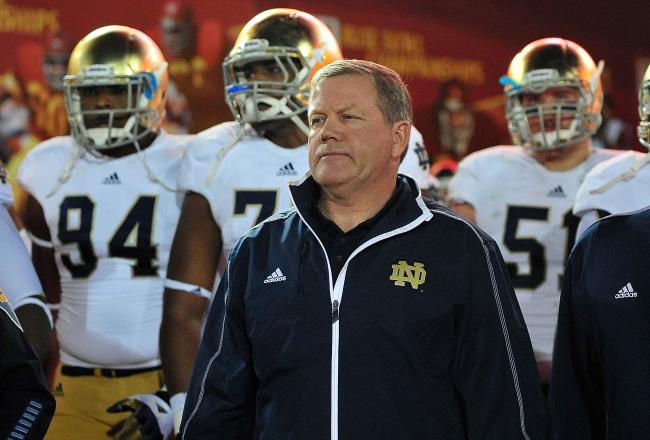 The Fighting Irish started the season in Ireland by dismantling the Navy Midshipmen. George Atkinson III and Theo Riddick both ran for two TD’s. Defensive end Stephon Tuitt scooped up a fumble and 77 yards later another TD was on the board as Notre Dame routed Navy 50-10 in Dublin.

QB Tommy Rees came in the game late to relieve Redshirt Freshman QB Everett Golson and led the Irish to a game winning field goal on the last drive of the game. Kyle Brindza’s 27-yard field goal kept Notre Dame in the top 25.

“It was hard,” Manti Te’o said speaking of his week. “But I had my family around me. At the end of the day, families are forever.” The heavy hearted linebacker led his team to a much needed win after a week in which he lost his grandmother and his girlfriend. The Sr had 12 tackles and 2 pass break ups. Most importantly, he showed true grit maybe showing his teammates the level of commitment that he demands from them.

Manti Te’o had 2 of the 5 picks the Fighting Irish took from Michigan. Quarterback Tommy Rees once again sparked Notre Dame’s offense in a 13-6 win over the Wolverines. No late heroics for the Wolverines this time round.

The Stand will forever be remembered as the moment the Irish and their faithful truly started to believe that they were good enough to make a run to Miami. The Golden Domers held Stanford out the end zone with the Cardinals getting four shots from inside the 4. The Irish stood tall but had to wait on a review to begin the party. On 4th down, Stepfan Taylor came inches away from scoring and did cross the goal line before he hit the ground. Fortunately for the Irish the referee’s blew the play dead before Taylor got in. South Bend Party!

Theo Riddick ran for a career-best 143 yards against BYU. He led a ground attack that rushed for 270 yards, with Cierre Wood picking up 114 yards and George Atkinson III scoring the winning TD as Notre Dame came from behind for a 17-14 win.

The best win of the season may have come in Norman for the Golden Domers. Manti Te’o’s late pick against OU opened the door for the underdog Irish to get to 8-0. Everett Golson punched in the decisive 1-yard TD in the fourth quarter. Notre Dame beat No. 8 Oklahoma 30-13 and demonstrated that they belong in the discussion of elite teams.

The win in Norman was they’re biggest win of the year but the Notre Dame’s signature win definitely came at home against Pitt. That day young Golson grew up. Everett threw 2 TD passes in the final quarter to force OT. Then in overtime he ran for the winning score after Pitt missed a chance to win on a 33-yard field goal.

The Irish easily took care of business against Boston College. Everett Golson accounted for 3 TD’s in a 21-6 win for Notre Dame. He ran for a touchdown and threw for two more helping the Irish get a win over a school that twice in the past ended their chances to go on to a  National Championship.

The Irish manhandled the Deacon Demons on way to an 11-0 mark. That day Kansas St. and Oregon lost, which vaulted Notre Dame to #1 in the Nation. One game left to play, one game away from Miami.

No Matt Barkley, no chance. The Trojans did the best they could to derail the Irish’s Championship hopes but Manti and the crew from South Bend was having south Florida dreams. With less than 4 minutes remaining, the Irish stout defense held the Men of Troy out the end zone four plays straight. The 2nd big stand of the year, punch their BCS Championship Ticket!