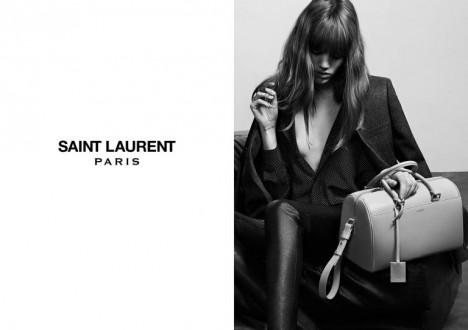 For the purposes of this shoot, Freja Beha is wearing leather pants with a polka-dotted shirt, along with a more mannishly-cut suit that fits her androgynous figure to a T. The picture calls to mind a previous campaign featuring Saskia de Brauw, likewise shot by Hedi Slimane, dressed as a boy to present Saint Laurent’s menswear line.

The top model also displays a series of accessories, including leather goods, from the brand’s pre-fall 2013 collection.

In the backdrop to these photographs you’ll spot Saint Laurent’s new boutique in Paris, which just opened on 53 avenue Montaigne (8th arrondissement) on May 9.