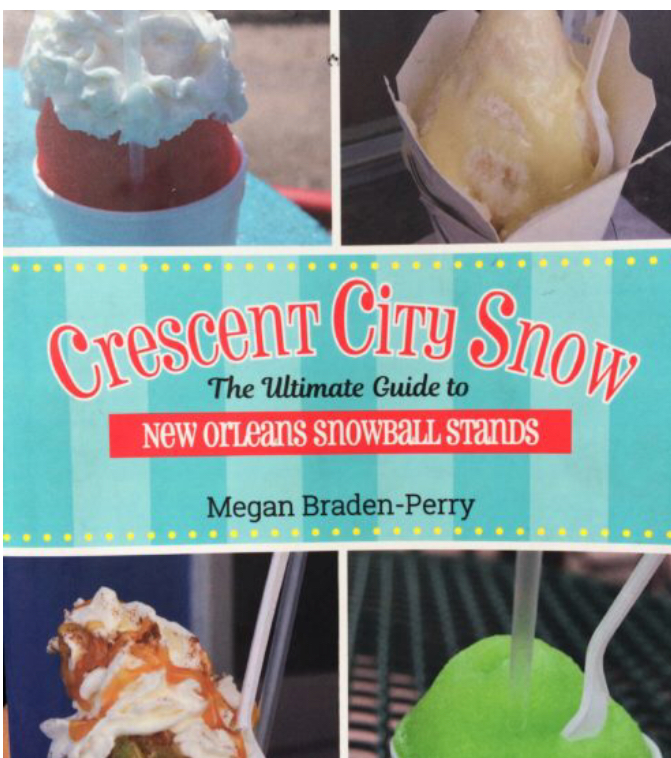 I’m convinced everyone loves snowballs and I don’t want to hear otherwise. There may be some killjoys who don’t prefer happiness in the form of an icy delicacy…but I don’t know them. Don’t care to know them.

My people are the ones who have a favorite stand and a favorite flavor because they’ve done some extensive research.

The ones who don’t care about a color stained tongue.

The ones like Megan Braden-Perry, author of Crescent City Snow: The Ultimate Guide to New Orleans Snowball Stands, who can effortlessly tie memories of friends and family to a snowball.

Crescent City Snow was published in March 2017 as the first ever non-fiction book about New Orleans snowballs. Megan Braden-Perry celebrated the release of Crescent City Snow on March 12 at Stop Jockin’ Snoballs (3600 St. Bernard Ave., New Orleans, LA 70122) and traveled around the city promoting her book the entire summer. She appeared at multiple libraries, bookstores, and snowball stands to inscribe copies and answer questions about all things snowball.

Braden-Perry’s adventure inspired me to begin my own. I’m sure whichever part of my body that’s affected most by sugar will be glad when the summer comes to an end.  (Although I’m not going to stop. Crescent City Snow mentions several stands that are open year round.) After I asked her questions about her own journey. I retraced some of her steps and gained some new favorite flavors as well as a fresh perspective on Louisiana’s best treat.

In the introduction of Crescent City Snow, she shares her memories of visiting different stands with family members and friends. This is a tradition that many Louisiana residents participate in without even giving it a second thought. Every snowball lover has had experiences similar to the ones mentioned in Crescent City Snow. Like rushing your mouth to the sides of your cup to catch the overflow of syrup, debating your love or hate for condensed milk, or simply sharing a snowball with someone you love.

”Moments like that, I treasure. They are what make snowballs more than just a snack.”
– Megan Braden-Perry, Crescent City Snow: The Ultimate Guide to New Orleans Snowballs Stands

I’ve shared a snowball with every person I love. I can even go as far as naming their favorite flavors. I know that my grandmother enjoys pineapple and piña colada. My oldest sister prefers cream flavors while my middle sister leans more toward the tart flavors. Pineapple and lemon mixed is my mother’s favorite. My niece loves cake batter, cotton candy, and all things rainbow.

The memories that surround me knowing their favorite flavors seem endless. One of my earliest memories involving a snowball was when my elementary school lined us up to walk to the nearest stand for an end of the school year custom. This was in the village of Folsom, LA so it wasn’t that far of a walk but little Thelisia experienced it differently. It was a trek! We walked for what felt like hours in the heat but once we got there, it was well worth it. With $1, I ordered a lemon-lime. My classmates and I sat around on picnic tables and in the grass showing each other the color of our tongues.

My most recent snowball related memory I have comes from me following Braden-Perry’s footsteps. In River Ridge, I watched a grandmother help her wiggly little grandson choose a flavor at Sauve’s Snoball (formerly Mr. Frank’s Snoball; 2215 Hickory Ave. River Ridge, LA 70123). Then bending slightly down toward him to help him carry his treasure. He was going to spill it, inevitably, and they would probably fall out for a second but in that moment I saw a tradition being carried on.

This woman has probably done the same “don’t drop it” dance with her own children and now she was passing down the experience with her child’s child. It made me think of Hansen’s Sno Bliz. During the Great Depression, in 1939, Ernest Hansen and his wife Mary opened their snowball stand after Ernest invented the first ice-shaving machine. 7 decades later, their granddaughter, Ashley Hansen is now operating the stand.

It is impossible to read Crescent City Snow and not have your interest piqued by the people and stories behind these businesses. Each snowball stand is collectively a part of a tradition and history that is uniquely southern yet they all have something that sets them apart. Some are ran by families, some by friends, and some by people from different ethnicities, some on the Westbank, some in Kenner, some in Chalmette. Some have specialty offerings or just a different culture & atmosphere surrounding them.

Braden-Perry has positioned herself as the definitive voice on New Orleans snowball stands, but, she remains humble and honest about it all. She doesn’t consider herself a food critic or anything. In the book, she doesn’t tell you how to feel about the snowballs. She only even loosely suggests you order what she’s having. She is simply a journalist, a mom, and a Louisiana woman, sharing what she enjoys.

Snowballs can be as uncomplicated as blue raspberry or cherry, which Braden-Perry thinks makes them super accessible to children. Like her son Franklin, who was only 3 years old during the development of the book and had already decided on his favorite flavor. “’Bwoo won. I want bwoo won’ He doesn’t care which flavor…he wants the blue one. My favorite part [of working on Crescent City Snow] were the times when I had my son with me. I would have him sitting there with his little crayons and stuff. He has fun hanging out with Mommy. And he’s in the book, a lot. He loves snowballs. We can pass a stand and he’ll point it out.”

The traditional snowball reminds us that simple things can and will always be good and make us feel good. Then there are times you want to punch it up a notch.

“More stands are stepping a toe outside of tradition with more decadent and decorative snowball offerings. I think it’s cool. I know a lot of people don’t like it because it’s not traditional. But, I feel like so many people advertise via Instagram, on social media. These days you need something to make you stand out. Even if that’s not the most popular snowball you have.”

I tried the stuffed snowball for the first time this year, and loved it!  I ordered the “Strawberry Fields,” a strawberry flavored snowball stuffed with vanilla ice cream from Just Chillin (3799 LA-22, Mandeville, LA 70471) I thought it would be like drinking kool-aid mixed with milk but instead it was unquestionably delicious.

I tried to venture out further with a cheesecake stuffed snowball from SnoLa (2311 N Causeway Blvd, Metairie, LA 70001). Although tafty, I concluded it was too rich for my blood (and kidneys).

“Taft Park in Metairie, they have an apple pie snowball that’s really, really good. That one’s on the cover. River Breez has a bunch of cool flavors, like a Chantilly cake flavor. And they do all kinds of cool toppings, marshmallows, candies. Taft Park does that too and a Belle snowball, from Beauty and the Beast. It has a red rose on top!”

The book is an unexpected way to approach snowballs. It is a treasure map encouraging readers to dive into the shared experience of the New Orleans snowball while creating their own stories surrounding all of these spaces.

It calls for readers to expand themselves beyond only visiting the more popular snowball stands. “I feel like nobody talks about snowball stands that much. When they do, they would always go to the same ones: Hansen’s, Plum Street… I wanted people to know they have all these snowball stands out here.”

Currently Megan Braden-Perry is touring snowball stands in the city and elsewhere. She does not plan to publish a second volume. However, more snowball related work is happening now with more to come. Follow @CrescentCitySnow on Instagram and Facebook to check out her most recent whereabouts.

Megan Braden-Perry is a native New Orleanian, Dillard University alum, and mother of a four-year-old boy named Franklin, who was heavily involved in the making of Crescent City Snow. She’s been published in Essence, NY Daily News, Jezebel, NOLA.com | The Times-Picayune, Gambit, and Where Magazine. She is the also the author of the children’s book, Allen the Alligator Counts Through New Orleans.