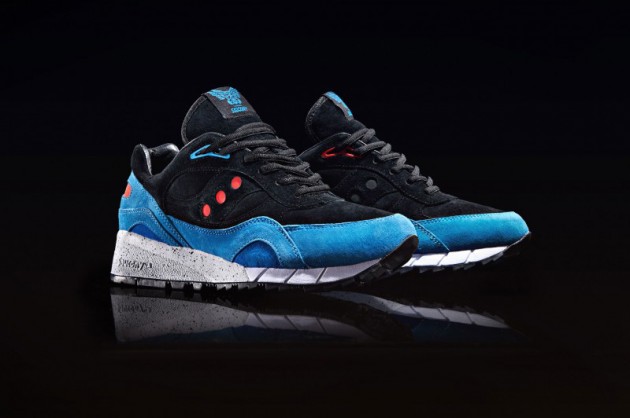 London sneaker store Footpatrol has teamed up with Saucony and presents the limited edition “Only in Soho” Shadow 6000. Paying homage to its Soho district home in London, a running shoe was created to represent the area.

“Long established as the entertainment district for much of the 20th century – London’s Soho has a reputation for sex shops, elaborate night life and the flamboyant film industry. With its eclectic atmosphere, bright neons, seedy undertones, dark alleyways and the hustle and bustle of the surrounding area, it’s place of shear entertainment on many levels! Footpatrol sits in the heart of Soho soaking up this ambience…

The term ‘Only in Soho’ started off as an in-house expression between TeamFP, which was used regularly to describe the various strange ‘goings on’ in the area, it’s now become a house hold slogan. We wanted to somehow incorporate this into a future collaboration, so when Saucony approached us we decided to use our place of residence as inspiration, and concentrate on Soho’s more provocative scene for which area is most famous for!

The bright blue and royal suede wrapping around the toe-box and throughout the shoe and heel represent the plethora of bright neon lights that flood Soho’s streets and alleyways, the red 3M pops on the lateral side & heel are a nod to the ‘other’ red lights which illuminate various windows once night falls. The dark upper symbolises the underbelly of Soho, the ‘unseen’, the hidden behind closed doors mystery… We’ve opted for a smooth & luxuriously full black suede upper, and continued this with black 3M pops on the medial side of the shoe. Leather lining around the heel with the ‘Only in Soho’ logo on the footbed, a splattered white midsole for the grimy side streets, with a black outer-sole. Finished off with a mash-up of the Saucony Originals and the Footpatrol gas mask logos on the tongue label.”

The Footpatrol x Saucony ‘Only in Soho’ Shadow 6000 will be released in-store and online for UK & International mail order on Friday 3rd May 2013.