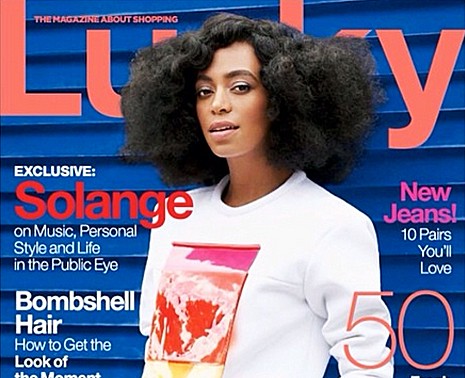 Solange Knowles covers the August 2014 issue of Lucky Magazine. The 28-year-old “Losing You” singer attempts to convince readers that there’s no bad blood with her famous sister and everything has been ironed out. Solange shares, “What’s important is that my family and I are all good. What we had to say collectively was in the statement that we put out, and we all feel at peace with that.”

Here are more highlights of the interview:

On New Orleans: “I lived in New York and L.A. and they were different worlds I learned to navigate. Fashion and music have so many elements I’m connected to, but they also have parts that I’m not so interested in. I can step in and step out of those worlds. Being in New Orleans gives me space.”

On her 2003 debut Solo Star: “I was serious about my songwriting but not necessarily too gung ho on all the other elements of being an artist—the public nature of things, the lack of privacy, the feeling of always needing to be on. I also felt really misunderstood by my peers and the musical landscape that I was in.”

On the elevator fight: “What’s important is that my family and I are all good. What we had to say collectively was in the statement that we put out, and we all feel at peace with that.”

On remaining true to herself: “I think about all of those phases that I went through, and the ridicule and whatever that I experienced. And I can’t think of one time where I ever felt like I was going to break. That’s because I had confidence instilled in me by my parents. They didn’t always like it—in fact, most of the time they didn’t—but they never asked me to change.”

Read more over on Lucky Magazine!

Previous « RICK OWENS PANELLED LEATHER HIGH TOP SNEAKERS
Next NEW MUSIC: USHER X NICKI MINAJ “SHE CAME TO GIVE IT TO YOU” »