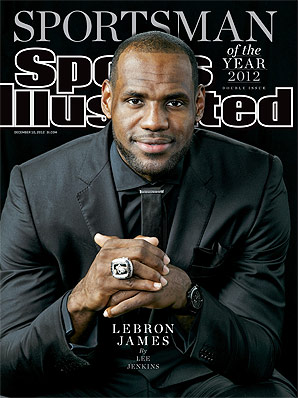 King James is having a hell of a year after capturing his first NBA Title and now embarking on his quest for another Sports Illustrated recognizes his accomplishments by naming him Sportsman of the Year.

And so, less than 29 months after he sat on a stage at a Boys & Girls Club in Greenwich, Conn., and incurred a nation’s wrath, LeBron James is the Sportsman of the Year. He is not the Sportsman of 2010, when he announced his decision to leave Cleveland in a misguided television special, or 2011, when he paid dearly for his lapse in judgment. He is the Sportsman of 2012. “Did I think an award like this was possible two years ago?” James says. “No, I did not. I thought I would be helping a lot of kids and raise $3 million by going on TV and saying, ‘Hey, I want to play for the Miami Heat.’ But it affected far more people than I imagined. I know it wasn’t on the level of an injury or an addiction, but it was something I had to recover from. I had to become a better person, a better player, a better father, a better friend, a better mentor and a better leader. I’ve changed, and I think people have started to understand who I really am.”

He muted his on-court celebrations. He cut the jokes in film sessions. He threw heaps of dirt over the tired notion that he froze in the clutch. “He got rid of the bulls—,” says one of his former coaches, and he quietly hoped the public would notice. When James strides into an opposing arena, he takes in the crowd, gazes up at the expressions on the faces. “I can tell the difference between 2010 and 2012,” he says.