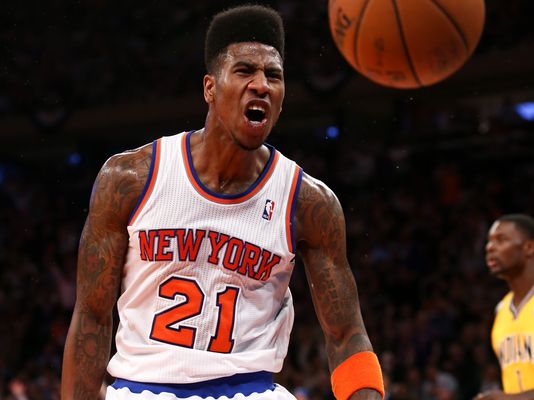 New York and Indiana started the game trading blows in the 1st quarter. Both teams shot over 66 percent from the field and from behind the arc, through the first eight minutes of play, with the Knicks holding a slim lead of 20-14. The physical play from Game 1 continued but there was only 2 free throws taken between the two squads in the quarter. New York got a few buckets from Carmelo to push their lead to nine at the end of the 1st but Raymond Felton’s 4/4 shooting from field was the reason the Knicks had a lead heading into the second quarter at 29-20.

New York kept their intensity high heading into the next period. Three minutes into the second the Knicks pushed their lead to 11 and forced the Pacers to take a 20. After the talk, Indiana slowly started to chip away at the Knicks lead. Iman Shumpert almost blew the roof off the Garden with a ferocious dunk but it seemed to wake up the Pacers. Indiana held the Knicks to only 10 points over the last eight minutes of the quarter. Paul George also came alive during that stretch hitting a three, slamming an alley down and providing the energy Indana needed to cut the lead down to 5 heading into the break.

With the score being 47-42 in New York’s favor, the two teams traded buckets for the first few minutes of the 3rd. That trend continued as Indiana came as close as one before Felton pushed the lead back up to four at 58-54 with 6:27 left in the period. The Pacers wouldn’t go away. Indiana would take a 61-60 lead on a Lance Stephenson 3 but that lead would be short lived because Carmelo Anthony got going. Anthony scored 7 of his teams last 14 points in the 3rd quarter giving New York a 72-66 lead going into the 4th.

As the final period began, so did a New York run. The Knicks went on a 18-0 run to start the 4th quarter and never looked back. Powered by Anthony’s 11 points during that span, New York held Indiana scoreless until the 4:48 mark left in the game. The rest was mop up duty. The Knicks went on to win 105-79 and even the Series at 1-1.

The slug match between Memphis and OKC resumed last night and both teams started off sluggish.  Neither team scored until the 9:51 mark in 1st quarter. The Thunder committed 5 turnovers in the first 9 minutes of play and Memphis turned that into a 7 point lead with less than a minute left in the period. Fortunately for OKC, Durant knocked down two free throws and then a tre on the next possession closing the period out.

Up 23-21, Memphis began the second stanza on fire, hitting their first 3 out of 4 shots from the field. OKC didn’t fall far behind though with Durant taking a breather. Kevin Martin keep the Thunder close by knocking down some fouls shots and a long jumper. The Grizzlies clinged to 30-29 lead with nine to play in the half, Durant checked in and the seesaw began. There would be 5 lead changes over the next three minutes. The Thunder had taken control with a Derek Fisher 3 and held a 39-35 margin with 6:18 to go in the quarter. Wouldn’t last for long, Memphis turned to Marc Gasol and he provided big. Gasol scored nine of the next ten Grizzlies points and carried Memphis to a 54-51 halftime lead.

The back and forth play continued to start the second half as OKC came out and took the lead just to give it right back. The two teams would go on to swap the lead, baskets, free throws, fouls and turnovers over the first 6 minutes of the second half. Neither really gained an edge, both teams plugged in going toe to toe no backing down. Memphis would hit a shot and OKC would come right down and answer. Until the 3 minute mark left in 3rd, neither squad would blink and when one would then they would force the other too. Gasol leading the charge on one side and Kevin Durant conducting the other. Durant finished the period strong like he has all series. He sparked a 7-2 run to give OKC a 74-69 lead heading into the 4th.

Memphis came out firing, tying the game on their first two 4th quarter possessions. They started the lead exchange again after the score knotted up. The Grizzlies kept playing Memphis ball and it started to ware on OKC but the Thunder hung around due the second straight poor free throw shooting performance by Memphis. 86-85 with Memphis ahead, Durant gets and hits a turnaround jumper and gets the foul. KD hit the free throw pushed OKC in front 88-86. After a timeout, Memphis gets a lay-up from Gasol and 1. 89-88 Memphis. Next possession Durant misses but Kendrick Perkins get the board and fouled by Gasol. He hit’em both 90-89 Thunder lead. A few possessions later Mike Conley hit a huge deep ball making the count 92-90 Memphis. The two teams trade misses and then Conley strikes again from 20 feet giving the Grizzlies a 94-90 advantage with 1:04 to play. Following a timeout OKC missed a 3 ball and turned it over after getting a offensive board. Memphis missed a three next time down but Tayshuan Prince got the board and Conley added another free throw making the margin 5 with 29.4 in the game. The Thunder used their last timeout to no avail. Tony Allen forced a horrible Durant shot and that basically wrapped it.The game ended with Memphis pulling the series even at 1 with a huge 99-93 win at Chesapeake Energy Arena.