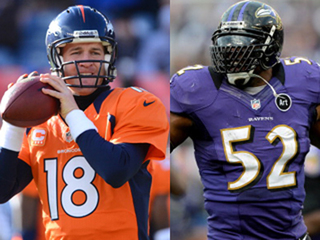 Peyton vs Ray. This epic battle has been one sided for the most part. Manning, during his career with the Colts and one game with the Broncos, has dominated Baltimore in most of their matches. Lewis hopes that trend changes on Sat. night.

Manning has won nine games straight against the Ravens and is undefeated against Baltimore in the playoffs. In Peyton’s only meeting against the Ravens in a Denver uniform, the Broncos beat Baltimore 34-17 in Week 15. He went 17/28 picking 204 yards through the air with a TD. Tight End Ed Dickson, Safety Bernard Pollard, Guard Marshal Yanda and Ray Lewis all missed that game, but are healthy with Baltimore headed to Sports Authority Field.

A big reason the Broncos won that match up was because their defense controlled the ball game. Chris Harris returned a pick 98 yards for a game-turning touchdown and Denver’s defense made sure they were never threatened in that contest again. The Broncos held Baltimore to 12 first downs, 278 yards and only allowed the Ravens to convert on one third down out of twelve in their first ever win in Baltimore vs the Ravens. Denver will need a similar effort if they want to go to the AFC Championship.

Baltimore is a confident and healthy team heading into Denver. Last week they defeated the Colts 24-9 in Lewis’ last game in Baltimore. Joe Flacco had a really good day completing 12 of 23 for 282 yards with two scores. As steady as Joe was, it was the two backs that powered the way. Bernard Pierce and Ray Rice combined for 171 yards on the ground and set the tone for Baltimore.

The Ravens’ defense also had a good day holding the Colts to 3 Field Goals even though Indy moved the ball well against Baltimore. Luck and the run game were good for the Colts but they never could punch the ball in the end zone. The bend but don’t break philosophy may not work at Mile High.

Denver has too much momentum for Baltimore to stop them. The Broncos and their crowd will be relentless, in Peyton’s first playoff game as a Bronco, as they look to host their 1st AFC Championship Game since 2006.

Viewing Note: If Peyton loses he will tie Brett Favre for the most playoff losses in NFL history. Flacco is the only QB to win a playoff game in each of his first five years. Denver is looking for their 12th straight win.