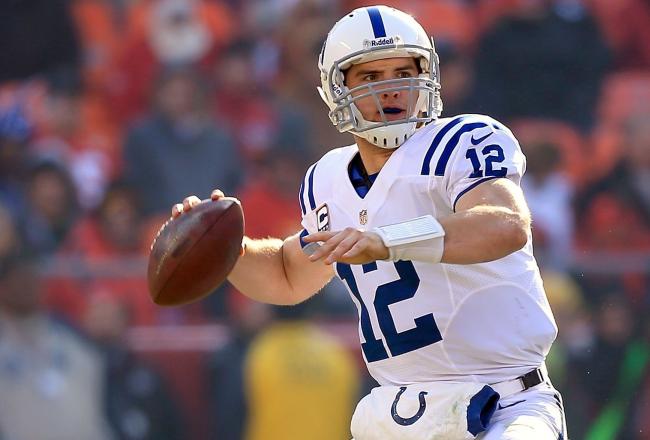 This meeting between these two franchises has so much emotion surrounding the game, its easily the match I’m most looking forward to watching this weekend. The Colts have a rookie QB making his first playoff start just a year after parting ways with Peyton Manning. A Head Coach that beat Leukemia in 3 and half months to rejoin his team’s post-season journey. Baltimore doesn’t have to worry about lacking any energy after Ray Lewis announced his retirement plans on Weds, not to mention it is the hated Colts coming back to town. All that being said, Joe Flacco will be the person in the spotlight the most on Sunday.

The fifth year QB has had unprecedented success in his short NFL career during the playoffs. Flacco is the only quarterback in the history of the league to make the post-season in each of his first five seasons. Despite such an impressive accomplishment, Joe’s status with the team still isn’t certain. Flacco is in the final year of his contract and if the Ravens lose on Sunday it maybe the end of Flacco’s time in Baltimore.

Chuck Pagano’s knowledge of the Ravens and Flacco could prove to be pivotal. The first year head coach has had an incredible season even though most of it was spent in a doctor’s office. Pagano’s fight with Cancer started out as a battle for his life and turned into a inspiration for the nation and his team. Now the battle tested coach is back just in time for the playoffs. He missed 12 weeks in total in which his team responded by winning 9 out of 12 with their head coach’s fight against his ailment being the catalyst for their push. Pagano was Baltimore’s Secondary Coach from ’08-10 and their Defensive Coordinator in 2011 before becoming Indy’s head coach. Many of the Ravens are still fond of Chuck.

Ray, Ray, Ray. Where do we begin? The 13 time Pro Bowler and sure fire first ballot Hall of Famer said that this will be his last go round. The Bartow native held a press conference on Wednesday. To let the world know that one of the greatest linebackers to ever play will be hanging ’em up at season’s end. We will miss the 7 time All-Pro if this is it but I believe the wiley vet knows that the young upstart Colts are on an emotional high and tried to give his team an answer. Won’t work!

I didn’t mention Ray Rice in this article because it seems like the bigger the game the less Baltimore gives the versatile running back the ball. I think Pagano’s return added with his knowledge of the Ravens gives the Colts a big edge. Indy is Chuck Strong and moves on. I also think we see Ray Lewis next year.

Viewing note: The Colts have won 8 of the last 9 vs Baltimore. Andrew Luck is the first QB to start a playoff game for the Colts other than Manning since Jim Harbaugh, Ravens Head Coach John Harbaugh’s brother, in 1996. The Colts use to play in Baltimore until the franchise moved in 1983.