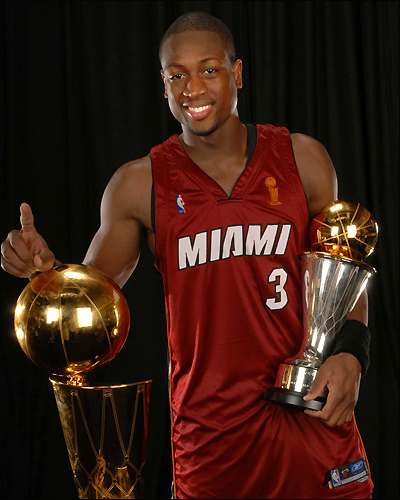 The stage has been set and the theme may be Durant vs James but if this series is going to be won by the Miami Heat, Flash has to steal the show. Wade, a two-time Finals participant and one-time Finals MVP, has relinquished too much of his leadership role to the younger LeBron James.
James has had a phenomenal season but this team goes as Wade does. James is an incredible talent arguably the best player in the league. Supported by winning his 3rd MVP title in 4 years, James has shown a propensity to dominate games, rack up points in bunches and pass the rock unlike any other big man in the league.  Yet James is still without the most important piece of the puzzle and Wade is the key. Too many times the 2009 Scoring Champion and South Side Chicago native is too readily giving up his reigns on the team.
During his days at Marquette, where he dominated the 2003 Midwest Regional being named MVP, recording the fourth triple-double in NCAA Tourney History vs #1 Kentucky birthed the big game spirit that help him win his first NBA title. As a rookie in the NBA he lead his team in scoring and assist in the playoffs. Edging out the Hornets in 7, hitting a buzzer beater in Game 1, and losing in and hard fought series to the Pacers in six. The Pacers held the best regular season record that year with 61 wins and 21 losses.
In 2004, Shaq was added to the roster and Wade’s game matured. Wade became a first-time All-Star. He made the Nets easy work averaging 26 pts, 8.8 ast, and 6 boards in a 4-0 sweep. Flash, took it up when the Wizards came to town. Dropping 31, grabbing 7, and dishing out 8 on avg during another sweep. He pushed the reigning Champion Pistons in the Eastern Conference Finals to 7 despite the Flu, a Knee Strain and a Strained Rib that caused him to miss Game 6. He did “Flash” some brilliance by scoring 42 & 36 in Games 2 & 3.
The 2005-2006 is when Wade hit a different stratosphere. Leading his team to 52 wins during the Regular Season, he made his second All-Star Appearance making the game winning put back. Starting the Post Season against the Bulls he suffered a Bruised Hip but bounced back to sphere head the win in a Six game series avg 24 ppg. For the second straight playoff made quick work of the Nets in 5. Games 2-4 against the defending Eastern Conference Champion Detroit Pistons he was spectacular scoring 32, 6 rebs and 4 dimes on average. Ending the Pistons hopes of repeating in Game 6 with a double-double and 8 points in the last 4 mins of the 3rd.
The 2006 Finals was his moment. Falling down 0-2 and down 13 with 6 and a half to play in Game 3, Wade led a 22-7 run that Gary Payton capped with a go-ahead bucket. Wade scored 15 of his 42 in the fourth. Games 3 & 4 he scored 36 and 43. Wade was the engine that motored his team. Questions about durability and unseemly own self doubt may rob us of another special showing. But beware, he can always turn it on in a FLASH!!!