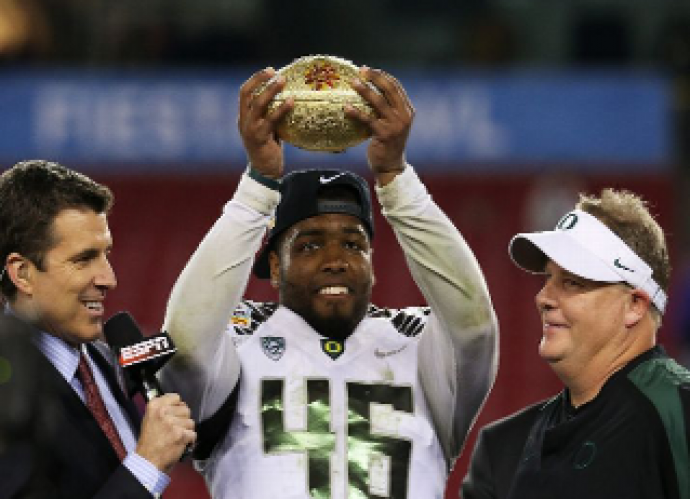 The Ducks are flying high after an impressive win against Kansas St. on Thursday night in the Tostitos Fiesta Bowl. Oregon took the opening kick, courtesy of De’Anthony Thomas, 94 yards and before you could blink the Ducks had the lead. Thomas wasn’t  done yet making his presence felt. After Kansas St stalled on their first 2 drives, failing to convert on a 4th down at the Ducks 39 and having to punt on their second possession, the Ducks took over and took control.

Oregon working with great field position, took their second drive 54 yards in 7 plays using only 2 mins. Thomas finished that possession with a 23 yard TD reception. De’Anthony has shined in BCS games in his young career. Thomas accumulated 332 yards in addition to 2TDs in last year’s Rose Bowl and he finished the Fiesta Bowl with 195 yards and two more scores on Thursday.

Very appropriate that they started fast, a staple of Chip Kelly’s brand of football, in what many think maybe his last game at the university. Kelly will be interviewed by the Bills, Browns, and Eagles in Arizona between today and tomorrow. Chip has took the Ducks to unparalleled heights during his tenure going 46-7 over 4 years, with an appearance in the 2011 National Championship Game against Auburn in addition to 3 Pac-10/12 Conference Championships. Oregon’s Offensive Coordinator Mark Helfrich will be promoted to Head Coach if Kelly opts to leave.

Kansas St did fight back for a while behind the steady play of Sr. QB Collin Klein. The Wildcats answered the 15 point deficit with a 10 play, 58 yard touchdown drive. KSU followed that up by getting the Ducks to go 3 and out. The Wildcats then drove 58 yards but couldn’t punch it in and had to settle for a Field Goal. Klein did have his best passing possession on that drive going 6/7 for 56 yards leaving the Purple Cats feeling optimistic. That feeling didn’t last long.

Kansas St missed a Field Goal attempt on their next drive and that was all Kelly’s Ducks needed. Oregon then went 77 yards in less than a minute to end the 1st half and this one was pretty much done when Barner scored on a 19 yard pass. That was the Ducks 24th TD drive of the season where they scored in less than a minute.