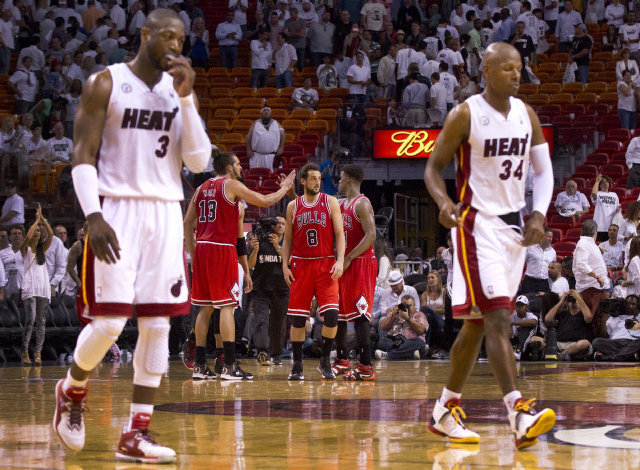 The Chicago Bulls spoiled the King’s MVP party by stealing Game 1 of the Eastern Conference Semifinal. Chicago out rebounded Miami 46 to 32 and held the Heat to 29 percent shooting from behind the arc. The Bulls led by Nate Robinson’s 27 points and Joakim Noah’s energy and double-double have shifted home court in their favor with the hope that some of their injured players can return. Nate followed up his superb opening round performance with an excellent gritty start to the second round. Robinson said, “I’ve played on some tough teams…something special about this group.” Coach Thibodeau knows that his team has a great opportunity at hand saying, “this is just one game. We have to play a lot better in our next one.”

Miami is alret but not phased. LeBron James acknowledged, “This is what the playoffs is all about.” James, Wade & Bosh combined for 47 points, hitting on 18 of 43 shots from the field and only getting to the line for 11 shots between the three of them. The Heat have to be more assertive in the paint, attack the rim on a more consistent basis and get to the line more often. Miami isn’t in trouble at all but can be there quickly if Bosh and Wade dont step it up in Game 2 and The King has to be The King.

Golden State let a precious opportunity slip through their hands in Game 1 of the Western Conference Semifinal. The young Warriors squandered a 16 point lead with 4:03 left in regulation and eventually loss in double OT 129-127. Golden St. looked unstoppable for about 44 minutes making 3’s, getting steals and dunks while making the Spurs look ancient in the process. Klay Thompson fouled out, Tim Duncan went to the showers early and then it happened, the Warriors youth showed. Stephen Curry had an unbelievable 3rd quarter scoring 22 points.

San Antonio responded by putting the second year pro out of San Diego St., Kawhi Leonard, on Curry. The adjustment by Spurs Coach Gregg Popovich held Curry to 8 points during the game’s final 22 minutes. Tony Parker, Danny Green and Manu Ganobili led the charge for San Antonio late offensively. Green hit countless big 3’s all night and Manu hit the game winning long ball with 1.2 left in the game. Parker led the Spurs in scoring with 28 and was the steady hand in their comeback win. The Spurs will need more of the same if they want to fend off this scrappy bunch. This is going to be a tough but short series. Golden St has the skill but not the mental maturity to make this one a classic.