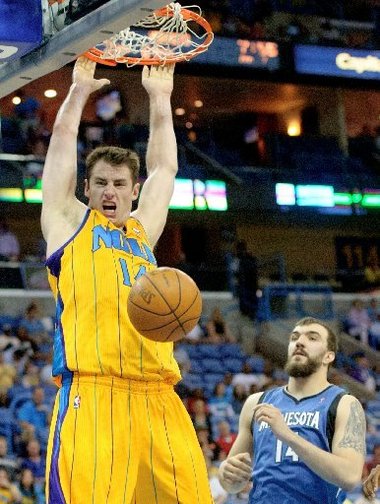 The Hornets found themselves down right out the gate to Minnesota. The T’wolves dominated the paint early and protected the ball well enough to race out to a 29-14 lead at the end of the 1st period. It would take a little time for New Orleans to get going.

The T’wolves dominated the lane early, scoring 30 points in the paint to take a 46-40 halftime lead. Halfway through the 2nd quarter with the Bees’ bench on the floor, New Orleans started to turn the tide. The Hornets outscored the T’wolves 48-32 from the 6:38 mark of the 2nd period until the end of the 3rd quarter.

Coming out the break, the Hornets’ defense held the Minnesota to 4 of 16 shooting in the 3rd quarter. After losing the paint battle by a 30-20 margin in the first half, New Orleans took over in the lane and had a 40-34 advantage at the end of the third period. The Hornets, who gave up 70 points in the paint in a loss to the Timberwolves earlier this year, outscored Minnesota 48-40 in the paint.

Led by the #1 overall pick in this past year’s draft, New Orleans outscored Minnesota 30-15 to take a 70-61 lead. Anthony Davis scored 8 points in the third period and finished with nine points for the contest. Davis hit a jumper that tied the score at 50 with 6:36 left in the 3rd period and Vasquez’s 3-pointer gave the Hornets their first lead at 55-54 with 5:11 remaining. Davis made a layup with 4:13 remaining that put the Hornets up for good.

The Hornets head to New York on Sunday to face the Knicks. New York is currently the 2nd seed in the East but have lost 5 of their last 7. The Hornets, on the other hand, have won 5 out of 6 games in which Gordon has played. New Orleans has won 4 in row.