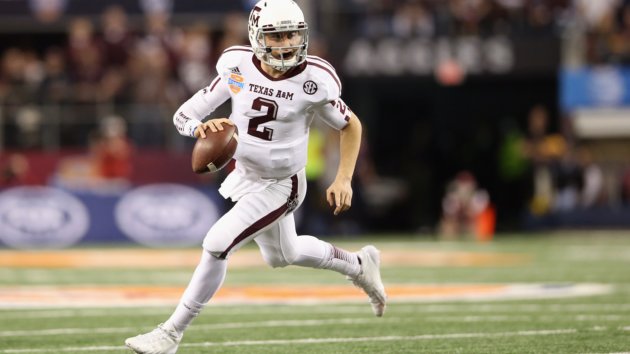 The Aggies are in good shape for at least two more years with Johnny Manziel leading the way. Manziel wasted little time after the opening kick getting the scoring started by taking A&M straight down the field. He capped their first drive of the night with a 23-yard TD scramble on 3rd and 9. That was the 10th time this season the Aggies scored on its opening possession. Just the beginning.

OU tried to keep pace early by responding to A&M’s score with one of its own. QB Landry Jones took the Sooners right down the field on the ensuing drive but got pulled inside the 5 yard line for backup Blake Bell, a normal substitution in that situation. Bell got stuffed on 2nd down and threw an incompletion on 3rd. Oklahoma had to settle for a field goal. After a penalty help halt Texas A&M’s next possession, OU went back to work. Jones engineered another long drive, aided by 12 yard run by Bell on a 3rd and 1. Once again though, the Sooners stalled inside the 10. OU got a pick on the next possession and gave it right back by tossing an INT.

Next drive, Manziel leads the Aggies on a 48 yard, 3 play series that was highlighted by a 5-yard TD run by the Heisman winner. OU prolonged some hope by scoring a TD on their last drive right before the half when Justin Brown caught a 6-yard pass from Jones. Manziel finished the half with 75 yards passing, going 9/17 with a pick and a 113 yards rushing, plus 2 TDs with the Aggies up 14-13. Then Johnny Football went bananas!

First drive after halftime Johnny and the crew went 91 yards on 8 plays. Ben Malena finished that series with a 7-yard TD run. Next time A&M had the ball they started from their own 11. No problem for Johnny. Manziel went 5/5 passing for 54 yards and added five more on the ground. Trey Williams ended that drive with a 30-yard TD run but the dagger came the next time Coach Kevin Sumlin’s team touch the ball.

Finding themselves up 27-13, A&M had a 4th and 5 on OU’s 33. With no hesitation, the first year Aggie coach leaned on the connection that lead him to this point. Manziel hit Ryan Swope on a short in route and Swope did the rest by out running the Sooners to the end zone. Ball game. With an entire quarter to play, the score was 34-13 but might as well been 100-0.

Texas A&M went on to add another touchdown to wrap the scoring up at 41-13. Manziel went on to break the Cotton Bowl’s record for yardage by racking up 516 total yards of offense including 4 TDs. 229 of those yards came on the ground. Johnny Football left Oklahoma’s Head Coach feeling like, “Johnny Manziel is everything he was billed to be.”