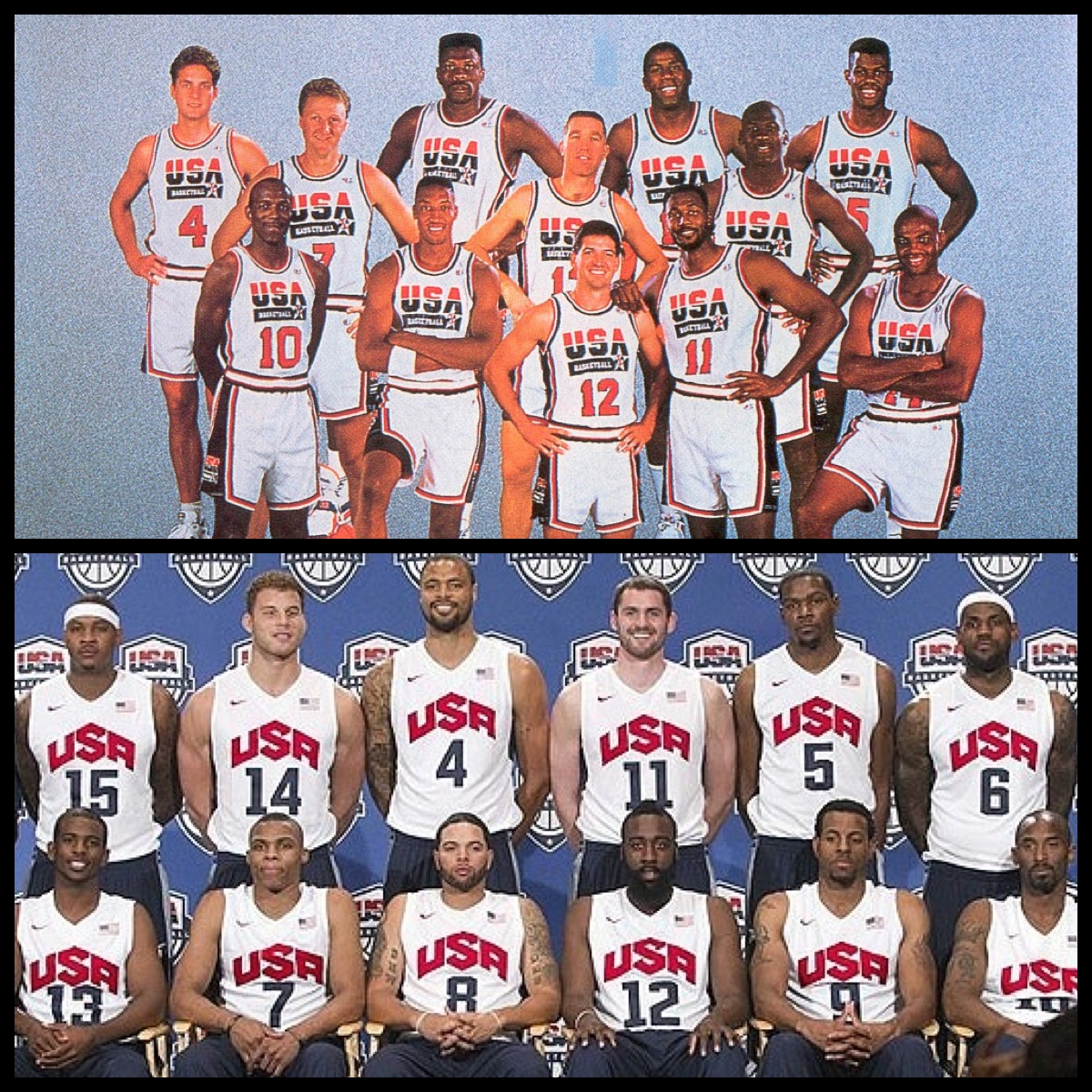 The ’92 Dream Team may be the best team every assembled in sports history. Yet there is a growing sentiment that this year’s version may be able to win if the two went head up. There are a few factors that would give both sides an advantage.
In ’92 the World was not prepared for the buzz saw of talent that was put on display by the NBA players being allowed to participate. The gap between the USA and the World were expected from the start. The ’12 Team doesn’t have such luxuries. The World has not only caught up but has become part of the fabric of the NBA. This dynamic has done two things to the international game. First thing is the intimidation factor is gone now that international players face the brightest of the US has to offer on a regular basis. It also provides a chance for scouting by the international players that is used by international teams during practice and games. That combination of confidence and game experience, for most of the international teams’ best players(D. Nowitzki, P. Gasol, M. Gasol, S. Nash) makes this advantage: ’12 Tougher Competition.

The ’12 Team has tougher competition but still has no match amongst their competitors. The fact that this story has garnered this much debate is a testament to their talent. The ’12 Team’s one weakness may have been the ultimate strength for ’92, an abundance of big men. The low post presence of Ewing, Malone, Barkley and Robinson gave the ’92 Team a riches and array of skills, toughness and talent that may never be matched(and to think, Shaq should have gotten that last spot instead of Laettner).

The mentality of the ’92 big men would be too much for Love, Griffin and Chandler. The swingmen and backcourt for ’12 would also be drawing the short end of the stick when it came to a mental edge. The overall mentality of ’92 Team was the pinnacle period of the sport when it came to competing. This ’12 Team is special but the will to win with so many stars on so many teams in that Magic/Bird and Jordan era the advantage goes to: ’92 Killer Instinct and Low Post Game/Size and Power.
The Olympic Team from the US is in unchartered waters that will prove to pay dividends that the NBA is now reaping. The year round AAU Basketball Players that grow up going head to head form friendships, a respect for one another’s skills and comfort level playing on All-Star and Travel Teams together. AAU has also created a venue for players to specialize in basketball cementing their skill level and raising the level of play since the end of the Golden Era of Hoops.

Today’s ’12 Team at the wing is quicker, longer and stronger than their ’92 counterparts. James, Durant, and Anthony would be too much for Pippen, Mullin and Bird. Bird was at the end and was a ceremonial pick while Mullin isn’t known for his defense. Pippen would have held is own but he could only check that barrage of talent for so long without the Reigning MVP, League Scoring Champ or the Bull Rush Game of Melo getting something going. The advantage clearly has to go to: ’12 for Conditioning, Speed and Athleticism.
So to truly settle this debate we have to choose the rule settings in the matchup. Basketball’s difference between ’92 and ’12 is simply no hand checking and carrying. Back then the game was more physical where today’s game is more built to let the offensive talent be displayed. Since I like the old school style and it’s my post we’ll allow hand checking and no carrying. The strength of Magic and Drexler would negate Westbrook’s speed along with Paul and Hardin’s shiftiness. D. Will would be a problem but ’92 still had Stockton who would just carve u alive.

It really would all come down to Jordan vs Kobe, ironically the person who started this debate. Bryant mention the age and shape of his counterparts but he is 5 years older than what Jordan was at his Dream Run, and that is the difference is this matchup. Jordan not only being Jordan would be more athletic, younger, quicker and just flat better. Jordan would be all over Kobe defensively and offensively relentless trying to take him off the dribble as often as possible. While physically and mentally trying to intimidate and harass Kobe on every possession. If it came down to them two, no disrespect to Byrant but it wouldn’t be pretty for the Mamba. Not to mention Chuck Daly would”ve coached the boxers off Coach K. Advantage:  ’92 Hand Check, Coach and Jordan.