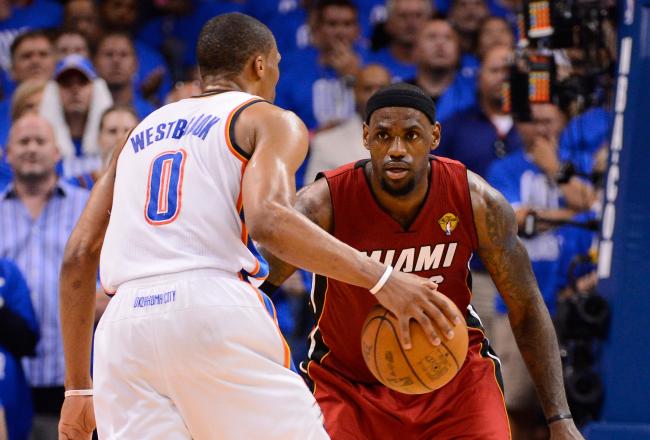 In order for the Thunder to continue the success they experience in Game 1, they will need their roles players to keep stepping up. Miami had one out of their three stars show up big and that’s not something to bank on night in and out. Harden didn’t play a big role in the win so that’s a major concern for the Heat but neither Wade or Bosh played well.
Miami needs to focus on going to the rack and worry less about outside shooting. The Thunder looked as if they could have played another half but if James checks Durant and Wade pounds the paints the energy level of the young horses from the Midwest may dwindle a bit. Bosh and Chamlbers should be the only players shooting from 18 and beyond. Everyone else should be focusing on getting and making higher percentage shots. Wade and James should be trying to get to line as often as possible because the supporting cast around OKC’s big three plays huge in front the home crowd.
Durant, Westbrook, and Harden combined for 68 points while getting 37 from the other five players who played significant minutes. Which ever team can get 70 out of their stars and 30 out of the role players wins the game. The Thunder look better suited to do that four times.